FOOTBALL: There is always the urge to leave the curtains drawn when you can hear the rain pelting against the windows of your bedroom, writes Mark Hearle.

I can imagine what Stephen Cleeve and the King’s Lynn Town officials must have been feeling when they heard that familiar sound last Saturday morning.

I’ve experienced it a few times down the years and, believe me, the day that generally follows never gets any easier.

The club appealed last Thursday for volunteers to meet at the ground on Friday afternoon to cover the pitch in readiness for the rain that had been predicted by the experts ahead of the scheduled National League fixture with Woking.

By the time most people were around, the wet stuff was falling – and continued to do so.

At 1.30pm on match day, the volunteers were back and began to remove the covers which, going by the pictures I saw, were holding thousands of gallons of water.

Unfortunately some had seeped through the sheets and on to the playing surface, making some areas of the pitch unplayable. That made the decision of the match referee to postpone the game rather more easier than it could have been.

Following the postponement the club came in for some unneeded stick from a few souls who are clearly unaware of the mechanics of how a game is called off at National League level.

It is never the club’s decision to postpone a game. The call has to be made by either the match official or by a local referee who is qualified to officiate at step 1 or 2 of the non-League pyramid. That is the first problem because up until I left the club last year, there was just one official who lived locally who was qualified to make an early decision.

To stop the visitors travelling, you would have needed to be having a look under those covers at 10am at the latest. I rather think at that point the pitch would have been playable.

I was disappointed to see those who had rallied to the club’s call in helping cover the pitch to then receive verbal brickbats from some frustrated fans following the postponement.

Without people like this there is no club. People who volunteer their time and services to the club down the years have kept it running for the most part and are the behind the scenes fabric that holds nearly everything together.

Yes, it would be nice to have an all-singing, all-dancing complement of paid staff holding down all the jobs but that will not happen.

In my time at the club, as a full-time employee, my job title was commercial manager. As the job expanded I became stadium and toilet cleaner, not to mention having to collect food for the catering positions from the cash and carry.

People have never been falling over themselves to provide meaningful help at The Walks. It’s always been left to people such as long-serving secretary Norman Cesar and, more recently, health and safety officer Jamie Farr to get the show on the road.

Jamie’s plea for assistance was taken up by a few who helped cover, and then uncover, what was to eventually prove an unplayable pitch.

Speaking from experience I can assure you those covers are damned heavy, not to mention awkward to move around.

When they first arrived we were advised that ideally it needs 15 people to manhandle each sheet. I wouldn’t think quite that number of people went along to help so to just get the covers on was a monumental effort alone.

They would all have been disappointed that their hard work had not paid off but the effort had been made and I can only imagine the outcry if the sheets hadn’t been put on.

In the words of manager Tommy Widdrington, speaking afterwards: “Nothing else could have been done.” I rest my case.

Thankfully the weather relented on Tuesday, allowing The Linnets to get back into home action, taking on high-flying Notts County, a fixture originally called off on Boxing Day – yes, due to a waterlogged pitch.

At the interval it appeared a famous win could be on the cards with the hosts leading, courtesy of a first league goal from Gold Omotayo.

The visitors started strongly after the interval and levelled before the game swung on a possible home free-kick/penalty that wasn’t awarded. County broke away and scored, making it Goodnight Vienna for the home team.

Captain Michael Clunan grabbed a late, but more than deserved second goal, which both his and the team’s performance merited.

Despite the defeat, a lot can be taken from the performance and carried into tomorrow’s FA Trophy tie at Tonbridge.

That is a very winnable match, as is next Friday evening’s visit to Southend United.

With an upturn in performances, manager Widdrington will no doubt be pleased but both he and his squad will know the performances must be turned into points and wins over the coming weeks to secure National League safety. 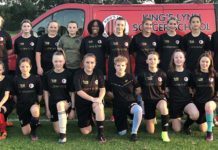