Ram raiders escaped with a cash machine after smashing the front of a post office.

Police were called to Kirkgate Street in Walsoken in the early hours of Wednesday after a low loader was used in the raid.

Cambridgeshire Police was alerted at around 1am but the culprits had fled the scene.

A spokesman said this raid is believed to be linked with another at Yaxley a few hours later, just after 4am, in which a police car was rammed and an officer received minor injuries.

Anyone with information about the Walsoken raid is asked to call officers on 101 quoting incident 19 of 12 January. 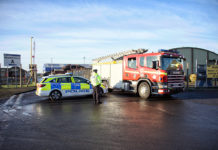 Man left with serious injuries after attack in North Lynn