LATE  AUTUMN AT THE PORT

Over October and November, 34 merchant vessels arrived and 33 departed the port with 22 and 12 in ballast respectively.

Shipments are both coastwise and overseas.

Timber from Scandinavia and the Baltic remains the chief import and Lynn was the destination for nine ships.

Five carried full cargoes of which two arrived from Riga which is the capital of Latvia and a leading member of the modern Hanseatic League. Four more vessels had sailed to Hull (3) and Seaham before discharging part loads at the docks.

The only other commodity imported in this period was aggregate for the construction industry. The Nikar G transported a cargo from Randers in Denmark and another from Oslo which is Norway’s capital. The Kongsfjell also brought a full load from Randers.

There was a greater variety of exports. Five shipments of barley were carried by four ships. The Vita took cargoes to the Irish ports of Drogheda (30 miles north of Dublin) and Cork on the south coast of the country.

The GT Vela transported another load to Eemshaven which is a deep water harbour in the North Netherlands opened in 1973. The Rig carried barley to Dordrecht which is not far from Amsterdam and Holland’s oldest town. The longest voyage was for the MSM Don to Lisbon to where Lynn merchants despatched big quantities of corn in exchange for wine in the 18th century.

Three ships took malted barley from Lynn to Buckie north of Aberdeen which is a regular run.

Through 2021 more wheat has been imported than exported but the Nikar G and Arklow Rainbow departed Lynn for Rotterdam and Manchester respectively.  A ship canal opened in 1894 (36 miles) which linked the English city to the Mersey estuary.

The RDJ Johanna carried a full cargo of rapeseed to Cuxhaven at the mouth of the Elbe river on the German North Sea coast.  It is valued for its oil rich seed used in the food and cosmetic industry. Fenland reclamation in the 17th century led to the growing of rape and other crops for export.

Beans have been a staple export for centuries even if in modest quantities today. The Eems Sky transported a load direct to Floro in western Norway and two more part shipments arrived in Norway carried by vessels sailing via Hull. There were two more full cargoes transported by the Salar and Fri Dolphin to Rotterdam and to Rouen in northern France respectively.

The mini mountain of scrap on the Bentinck dock was again somewhat diminished by five ship loads taken to Amsterdam (4) and Klaipeda in Lithuania.  Due to increased siltation since the summer the Cherry Sand arrived in the docks on 14 November to undertake routine dredging operations.

For the King’s Lynn Conservancy Board (KLCB) the maintenance of its craft is a top priority. The pilot cutter St Ann went to Fosdyke near Boston for repairs to propeller shafts and bearings as well as a general paint up for her statutory certification survey.

Associated British Ports (ABP) make a significant contribution to the local and regional economy and has worked with KLCB to keep Lynn trading despite the impact of COVID-19. 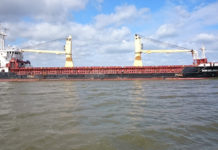