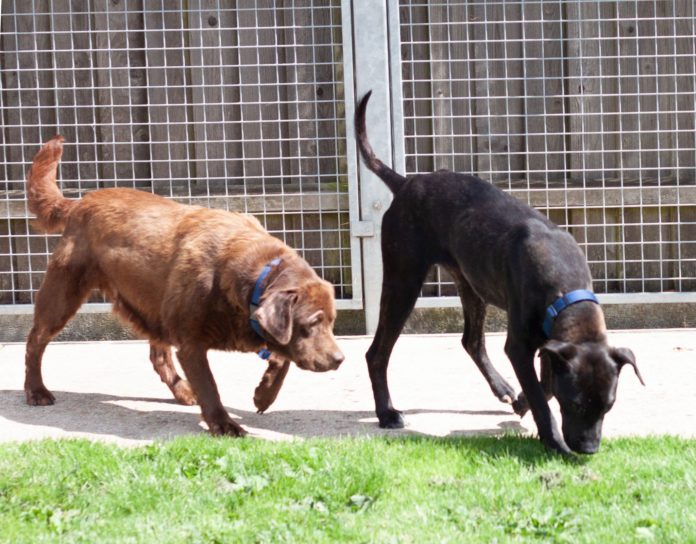 A loving pair of dogs, dumped and tied to a tree in Downham Market, have been found new homes.

Underweight Milly and Tilly were found abandoned by a member of the public on July 20 and one had a shock collar around its neck.

The collars are used to train and control animals but can cause pain and fear by delivering a shock.

They have been illegal in Wales since 2010 and animal charity the RSPCA has been calling for them to be outlawed in England too, a spokesman said.

The abandoned dogs were collected by a local dog warden who looked after them for seven days before they were taken to the Eau Brink Rehoming Centre, run by the RSPCA Norfolk West Branch.

Female chocolate Labrador Milly is eight to 10 years-old. She also had mange. Eighteen-month-old Tilly, who was wearing the shock collar, is a mastiff-type cross.

The spokesman said both were microchipped but Milly’s was unregistered and Tilly’s was only registered to a breeder who had sold her on. Neither dogs had been neutered.

Emily Cole, Eau Brink centre manager, said: “Poor Milly has mange which was around her eyes and also her back end. To start with we thought she may have recently had pups because she was quite droopy in her skin around her nipple area but a vet said this is actually a result of her losing weight very quickly.

“Tilly, who is very nervous, is still the most sweet loving little dog. When she arrived here she jumped out of the van and planted her paws on my shoulders to give me a kiss –  she is so very affectionate.

“She is very thin as well and so it is a mystery what has happened to these dogs, as to why they were abandoned and what happened to them to lead to them suddenly losing weight in such a short space of time.

“I understand that people sometimes end up in situations where they may struggle to care for their pet and we’d always urge anyone in that situation to seek help – abandoning them is not the answer and fortunately in this instance they were found, but that isn’t always the case.

“Thankfully, Tilly and Milly did really well in our care –they are just the sweetest pair of dogs – they are friendly and polite which means they have been in a home previously.

“It is just really heartbreaking that whoever had them previously felt that this was the only option to abandon them when they could have asked for help.”

North West Norfolk MP James Wild said the ban on shock collars was not yet law in England but will be under new legislation.

There is an online donation page for the dogs. Search www.justgiving.com and type in Milly and Tilly.