There were celebrations across West Norfolk yesterday (Tuesday) when students collected their A-level results.

At Springwood High School in King’s Lynn 36 per cent of students achieved A* or A and 84 per cent achieved A* to C.

Joshua Ampomah was one of the top achievers with four A* and is going to Oxford University to study engineering.

Andy Johnson, West Norfolk Academies Trust executive headteacher, said: “The staff and governors at Springwood are delighted with the achievements of our students. Days like this are what we exist for.”

“There was a very positive atmosphere at Springwood this morning (Tuesday) and, after a challenging few months, it’s been a wonderful celebration of the success of the brilliant young people collecting their results.”

At the College of West Anglia (CWA) 77 per cent of A-level students achieved grades A*-C, with an overall pass rate of 99 per cent (grades A*-E).

Principal, David Pomfret, said: “I am delighted with the good A-level results we have achieved this year. To achieve a pass rate of 99 per cent is testament to the hard work, dedication and commitment of both our students and teaching staff.

“In addition, the number of students achieving top grades has been outstanding, with 77 per cent achieving A* to C. We couldn’t be prouder of all they have achieved during their time with us and we wish them every success in their future endeavours.” 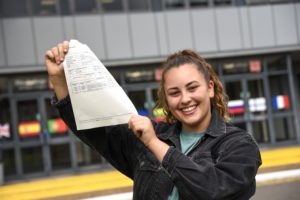 The percentage of A* to C grades awarded increased this year to 83 per cent making it the fourth successive year of significant improvement.

Cameron Backham was the top performer with three A* and an A. He set to be presented with the Royal Gold Medal by the Queen for the best A-level results in the sixth form.

Principal Sarah Hartshorn said: “It has been another challenging year for both staff and pupils.  I have been very proud of the determination and resilience our students have shown during this year’s examination series.

“It has been a privilege to work with these students and we wish them well for the future.”

See Friday’s edition of Your Local Paper for more on A-level and GCSE results.