A special piece of artwork inspired by the Holocaust has been unveiled at a West Norfolk school.

Student Nina Koulman took part in an education project called Lessons From Auschwitz Online and was moved to create a picture which is now hanging in the reception area of Springwood High School, King’s Lynn.

Miss Koulman, 18, created the artwork after taking part in the Holocaust Educational Trust initiative and she has given it to Springwood after leaving the school.

“I chose to make an artwork because I feel that these terrors cannot be expressed in words, instead I wanted to create artwork to commemorate those murdered in the Holocaust,” she said.

“Learning about and from the Holocaust is very important, because it is a tragedy in history that we must learn from and must be taught so that the future generations can recognise and challenge the hate that leads to events such as the Holocaust.”

Chris Whitlam, head of history at the school, said: “We are delighted to receive this thought-provoking artwork commemorating one of the darkest times in history.”

The school has been involved with the Trust for more than 10 years, and pupils usually make a trip to Auschwitz and a seminar in London exploring the subject in greater detail before completing a follow-up task. 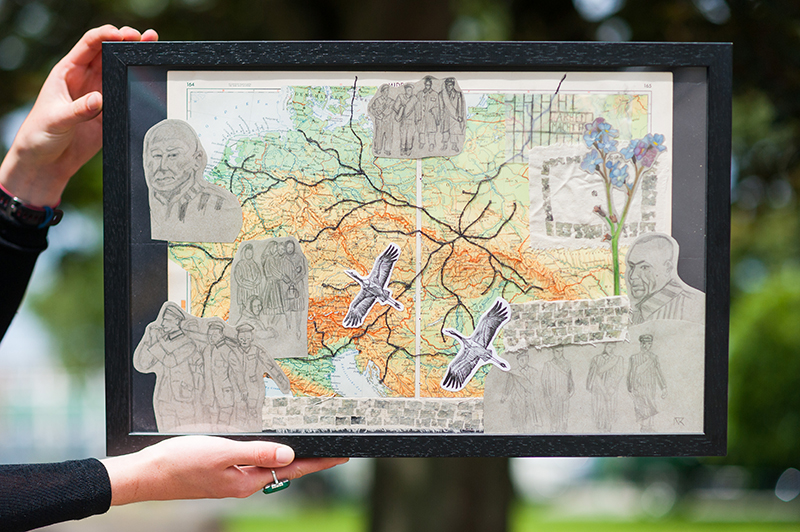 In the past Eva Clarke, a Holocaust survivor born in the Mauthausen concentration camp, visited the school to talk to students.

This year, due to the pandemic, the seminar was moved online and Miss Koulman said it was important to remember the Holocaust and the fact that the names of two million of the six million murdered are not known.

“It is important to remember all those that died and the systematic way in which it happened,” she added.

Miss Koulman has lived in this country since she was a toddler but is hoping to return to her native Netherlands and train as a primary school teacher.

The Holocaust Educational Trust’s aim is to educate young people from all backgrounds about the Holocaust.