A foggy Whitlingham Broad meant poor visibility in the open water swim, before a sunny but undulating ride though beautiful south Norfolk roads, concluding with an off-road run around the lake.

Beth Norman took on her first triathlon, going straight in at Olympic distance for a charity close to her heart, Blood Cancer UK. Her grandad has been diagnosed with leukaemia and so far she has raised £2,752. She completed the event in 2.58.59 to take home her age group trophy.

Maureen Wolfe finished the Olympic distance in 3.35.49, thanking Tri Harder in Dereham, who supplied her with a free set of elastic laces after an unfortunate accident with a door.

Husband and wife combo Marie and Mark Doughty divided their entry with Marie completing the sprint in 1.37.26 and Mark the Olympic distance in 2.54.26.

Annabel Putterill entered the sprint event for her first triathlon and finished in 1.39.36, which included extra time to untangle her hair from her bike helmet.

Bianca Lewis was also a debutante and finished in 1.50.04. 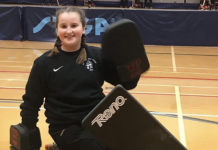 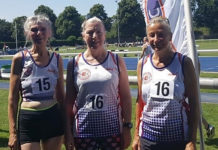 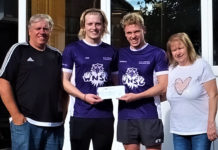