Former Labour party leader Jeremy Corbyn added his voice to a campaign to rebuild King’s Lynn’s Queen Elizabeth Hospital (QEH) at a rally in the town.

Last Saturday’s event, which started in The Walks before a march into the town centre, also marked 73 years of the NHS.

MP Mr Corbyn was one of a number of speakers who highlighted the need for a new hospital as the roof at the QEH is currently being held up by around 200 steel props.

King’s Lynn and District Trades Council secretary, Jo Rust, said Mr Corbyn had been “incredibly shocked about the state of the hospital”.

She said: “It is a disgrace. We shouldn’t be in this situation. The local decision-makers knew that the hospital was built to last for 30 years. It is now 10 years over its sell-by date.

“It’s a disgrace that we are having to fight for a new hospital. We are in a competitive process to try to win money to contribute towards a new hospital.”

Campaigner Rob Colwell added: “We shouldn’t be in a situation where hospitals have to compete with each other to try to get funding for a new building. The money to fund the NHS infrastructure should be available when needed.”

Campaigners marched from The Walks to the town centre and gave out postcards for the public to sign and send to health secretary Sajid Javid calling for a new hospital for the town.

Another rally is planned in Lynn town centre on Saturday, July 17 from noon to 2pm. In September campaigners plan to go to the Houses of Parliament to lobby local MPs to arrange a meeting with Mr Javid.

Last week a group of local MPs, including North West Norfolk MP James Wild, signed a letter to Mr Javid calling for the QEH to be re-built and invited him to visit the hospital.

Former health secretary Matt Hancock visited the QEH three weeks ago when he opened the Sandringham Unit and saw first-hand the state of the aging building. 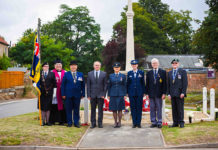 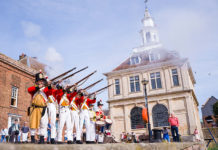 GALLERY: A day of exploring history 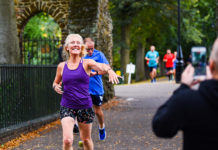 GALLERY: A decade of Parkrun