With two skydives under her belt, an 81-year-old grandmother has decided it is time to tackle another charity challenge.

Lilian Fisher, of North Runcton, has begun her mission to walk 100 laps of the village’s cricket field to raise funds to support hospital staff and patients affected by Covid.

The former nurse was inspired by the late Sir Captain Tom Moore, who raised £32m for the NHS by walking 100 laps of his Bedfordshire garden last year.

“I thought to myself, if Captain Tom Moore could walk to raise money for charity at 99, then why couldn’t I, as I’m not yet 82,” said Mrs Fisher, who has three grandchildren.

“My philosophy is age is only a number. While I still can, I will. Life is so short, you never know what tomorrow could bring.

“I have done a lot of things later on in life. When I was younger I looked after my children and worked as a nurse sister. I didn’t learn to swim until I was 60.”

“The money pays for things like tablet devices so patients can still see their family members so they don’t suffer from loneliness or boredom.

“It also helps pay for staff who may have PTSD (post-traumatic stress disorder) get psychological care and as former nurse, I understand,” she said.

Mrs Fisher, who completed her nurse training in Banbury, Oxfordshire in the 1950s, decided to fundraise to help keep herself busy after the sudden death of her husband, David, 12 years ago.

She has helped to raise thousands for the Poppy Appeal as a member of the Middleton Branch of the Royal British Legion by jumping out of an aeroplane, thousands of feet high – not once, but twice – in her 70s.

The mother-of-two sons was 74 when she took part in her first skydive and completed her second aged 79.

She said of the second jump: “It was with the Red Devils so I had do that one!

“The pictures show me skydiving with a massive smile on my face.”

But with her feet now firmly on the ground, Mrs Fisher said her Captain Tom 100 Walking Challenge had been good for her health, both physically and mentally.

“Before, I found walking on my own a bit boring, like there wasn’t any purpose to it. But this has given me a reason to make that effort.

“It’s so easy just to sit back and do nothing,” she said.

For her first lap, Mrs Fisher said she was accompanied by her grandaughter who timed her lap at eight minutes.

“I have since timed myself and have got it down to around seven-and-a-half minutes,” added Mrs Fisher.

“It takes me around half-an-hour to do my four laps. By the time it takes me to walk to the cricket field and back, the whole thing takes me around an hour-and-a-half, as I keep stopping and chatting.” 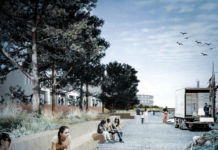 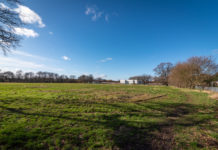 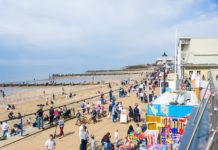