Sometimes you accidentally stumble across a belting story.

There’s a train of thought that you make your own luck and if you ask the right questions you unearth the hidden gold. While that’s often the case, in this instance, the tale of motocross talent Ollie Colmer literally landed in my lap. 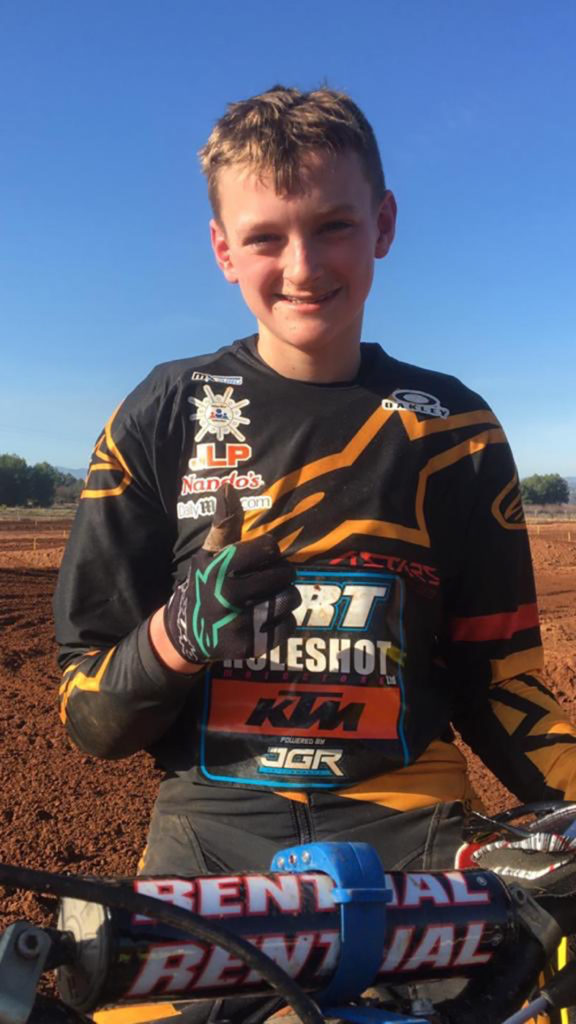 As part of the day job with Maze, I help produce PR and content for Adrian Flux – a West Norfolk company which has proudly supported motorsport since it was formed in 1974.

Thanks to their ongoing sponsorship of events, teams, venues, riders, drivers and rising stars, I get the chance to interview and deal with a wide range of people involved in two and four-wheel action.

The chance to speak to Colmer and his family about his life and career so far was never going to be a chore. Yet I didn’t expect to be left so gobsmacked by his story that I couldn’t wait to share it.

The 14-year-old started riding at the age of four and was already seen as one of Britain’s top talents when disaster struck. He broke his left leg twice within the space of five months at the age of 10 and was told to never ride again.

Fast-forward almost five years and he’s continuing to defy medics as he moves closer to becoming a professional.

“I’ve had a few serious injuries and I could do something else but I don’t want to, nothing’s going to put me off,” said the Adrian Flux-sponsored rider who is also backed by Nando’s, Daily Mail and other big brands.

“When I do fall off or get injured I’m always keen to get back on a bike as soon as possible. Every time I get on it I get this buzz of happiness and freedom. If I’m stressed with school work I just get on my bike and I feel free. It’s always been that way.

“I’ve now progressed to 125cc and I just want to keep getting stronger and going faster. The bigger the races the more excited I am and I want to work my way up to the top of the ranks until I’m the best in the world.”

Being declared an elite sportsperson allowed him to train in Europe this winter as his reputation continues to grow on the continent.

The Northumbrian added: “I do miss my family but this is what I’d like to do for the rest of my life.

“When you win it feels like everything has paid off. It does bother me if I don’t win but it’s part of learning and I’m doing that every day.”

Colmer’s one to keep an eye on and it’ll be interesting to see how his story pans out in the coming years.

So many indebted to ‘Mr Athletics’

But it’s quite clear from the outpouring of grief and tributes following his sad passing at the age of 72 that he was a truly special man (see p55).

Described as Mr Athletics by many, John did everything – and more – for West Norfolk Athletics Club. A fine athlete and runner in his pomp, kind-hearted John focused on giving everything back to local sport over many years.

Not content with just focusing his efforts on enjoying a glittering string of personal achievements – which included running four London Marathons – he wanted to pass on his expertise to others.

His volunteering extended beyond WNAC and athletes and runners across the district reaped the rewards of his desire to do good.

The impact he made and the friendships he created will leave a lifelong impression. To say he’s left his mark would be the biggest of understatements.

So many will forever remain indebted to John – a great man whose legacy will be felt for generations to come.

Respect is growing for elite

As I lay on the floor coughing up my guts, I was overcome with pride.

Pride that I’d finally beaten my 1km personal best of three minutes and six seconds. Pride that my mentor Matt Pyatt had taken more time out of his life to help me achieve my goal. And pride that I hadn’t surrendered to the pain on Saturday.

But as I drove home having completed 1,000m in 2.53.8 mins I did have to laugh at myself. I’d left nothing, absolutely nothing, out on the stretch of Walpole St Andrew road we’d blasted across. Yet for some, that time is a comfortable jog.

The elite runners, like British 1,000m record holder Jake Wightman, can cover that distance in 2.17.51 mins. And it literally blows my brain.

No amount of training would ever get me to that sort of speed, although I’m obviously getting quicker through a lot of effort and clever training thanks to Pyatt’s tutelage.

Importantly, I’ve learned to accept that. These elite runners have a God-given talent and genetic make-up that allows them to produce out-of-this world physical effort and speed. It might be a freakishly high VO2 max, or a massive amount of fast or slow twitch fibres in their muscles. And that’s just not me.

However, what I am doing is becoming a better version of myself. I’m running my own race, smashing targets and, thanks to one of the best about in Pyatt, learning more about how hard you really have to work to make running gains.