What is the aim of golf?

It’s to get the ball from the tee into the hole in as few shots as possible. The one who takes the fewest shots to do that across 18 holes – or 36, 54 or 72 depending on how many rounds need to be completed in the competition – wins.

It can become more complex when a scoring system is in play but more often than not the aim remains the same for players when they approach the first; the less times I hit the ball today the more chance I have of winning.

It might sound daft starting a sports column by reminding people of the simplicities of golf. But given the current criticism towards recently crowned US Open champion Bryson DeChambeau it’s just worth reminding people how the sport operates.

The American’s stunning success at Winged Foot saw him land his first major. His six-under-par total was the lowest US Open score at the course in history and has seen him win a competition that even the greats like Seve Ballesteros were unable to.

The problem is a lot of people don’t like how he achieved it. His triumph arrived at a time when plenty of debate continues around technological advancements making the sport easier than it should be. Clubs driving the ball even further and hazards being bypassed as tee shots fly hundreds of yards.The thought process behind the game is, for some, disappearing.

DeChambeau is one such player who has turned golf into a power battle. By adding almost three stone to his mass and focusing on the scientific element of his swing, he’s driving the ball an average of 322 yards. No wonder he’s winning competitions by half-a-dozen shots.

But surely that’s his prerogative? If he wants to bulk up and smash balls down the fairway or into the rough and hack wedged recovery shots onto the green then good on him. Nobody said how you have to get round a course after all.

His slow play is frustrating, he has a lot to say and he isn’t the most-loved figure on tour. Yet sniping about him taking the skill out of the game or making a mockery of golf, as Matthew Fitzpatrick did, just smacks of sour grapes. Fitzpatrick says it’s not a skill to hit the ball a long way. Well regardless of that, it takes ability and dedication to find a way around a course in as few shots as possible – even if it takes adjusting the length of your irons and spending hours honing your swing.

DeChambeau’s simply taken golf to a new level. And he’ll keep overpowering courses, and his competitors, just like Tiger Woods did, if his rivals can’t find a way of keeping up.

It’s been a year of frustration for all connected with King’s Lynn Stars.

Thoughts of a delayed 2020 campaign were finally shelved in July while stock car racing, thanks to its amateur status, has still been taking place at the Adrian Flux Arena the speedway outfit also call home.

Uncertainty about speedway reigned for so long that it would have almost drowned out the noise of bikes getting ready in the pits –had a meeting actually been held.

But at least plans for 2021, if speedway returns as the pandemic threatens to continue well beyond Christmas, are a lot more certain at Lynn’s end.

Team boss Dale Allitt has revealed the club have protection over the seven-man line-up that would have taken to the tapes this year had Covid-19 not struck.

Other teams cannot approach any of those riders without speaking to the Stars first which at least provides some semblance of security when British racing relaunches.

In Robert Lambert they have the star that every club wants, but hopefully still can’t get.

Call is spot on for local football

Damage limitation was rightly exercised when it came to the plight of Terrington Football Club.

After almost their whole first team departed, the reserves were forced to step up a division and lost their first North West Norfolk League game of the season 9-0. A new-look reserves lost theirs 11-0.

Hammerings are nothing new, as a teenager I was on the receiving end of plenty, but sport is different now. The number of teams and players has already diminished locally and it wouldn’t take too long before others followed suit if they were getting handed a thrashing week in, week out.

That was clearly a danger for Terrington who quickly had a number of options put to a vote at an emergency NWNL meeting. Fifteen out of 18 clubs voted for the first team dropping into Division Two and the reserves also moving down a tier with both sides’ week one results being expunged.

It’s a far from ideal scenario and while both teams may still struggle as they try to rebuild it’s better than being forced to continue the status quo and one, or both, folding later on in the campaign.

Terrington is a huge village with a proud footballing history but their Saturday adult side has already had to be resurrected once. Hopefully this time a call that was made for the good of local football by all involved will mean it won’t have to happen for a second time. 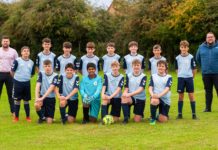