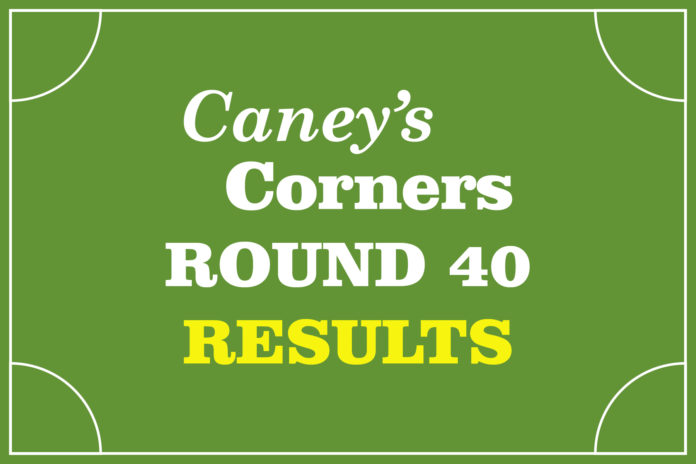 ROUND 40 RESULTS
Norwich v Burnley – Burnley (had the most corners), 14 corners in the game in total
Arsenal v Man City (FA Cup) – Man City, 14
Bournemouth v Southampton – Bournemouth, 18
Man United v Chelsea (FA Cup) – Draw, 6
Number of entrants: 26
ROUND 40 SCORES
‘MAY’ SCORES FOR FINAL £25 MONTHLY TOP-SCORER PRIZE
(ROUND 39 & 40, ONE ROUND TO GO)
ALL players are still able to win this prize
OVERALL SCORES FOR £250 END-OF-SEASON PRIZE (AFTER 40 ROUNDS, ONE TO GO)
TWELVE players still mathematically have a chance of picking up the prize jackpot. They are Andy Prior, Robbie Palmer, Danny Pooley, Nigel Chapman, Peter Jermany, Aaden Hayes, Amy Anderson, Mike Griggs, Karl Brown, Jon Parish, Joel Wille and Lewis Bush. 48 points, as always, are up for grabs in Sunday’s final round. If two or more players finish the season on the same points the winner will be the person, as per competition restart rules, who has collected the most round wins. If two or more players can still not be separated, the winner will be drawn out of a hat at random. This will be filmed and placed on social media for proof.