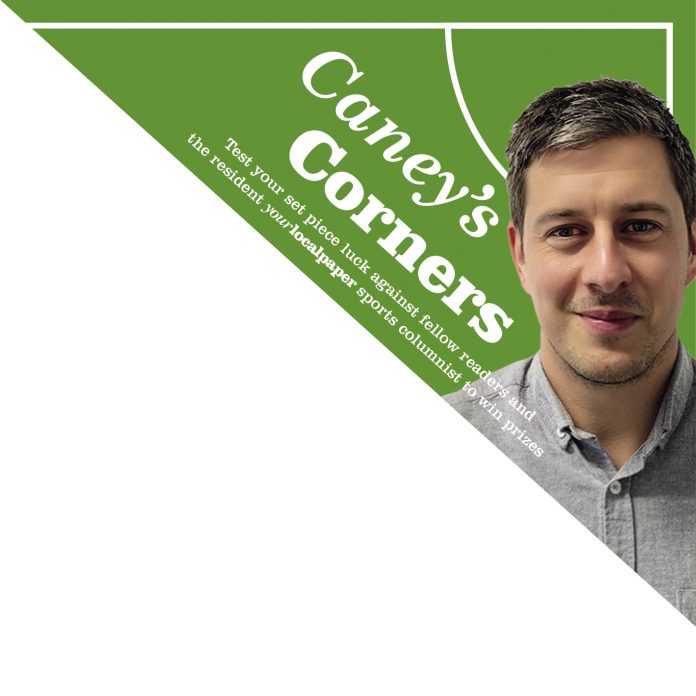 • ‘March’ winner Adam Tucker, who triumphed as a result of a tiebreak, only started playing Caney’s Corners during Round 27. During that time he has amassed 124 points – 72 of which came during the rounds that counted towards March’s prize. As a result he becomes the seventh different £25 winner from 39 players and could yet still pocket up to £50 if he keeps up his fine form.

• Our columnist Gavin Caney sits 21st out of 39 as he struggles to even claim a top-half finish in his own competition. To make matters worse, his wife Charlotte was the joint winner for March and almost pocketed £25 – something he has not been close to doing. His highest monthly finish so far was joint fourth in December. That said, he is 56 points in front of this month’s joint winner but still eight points behind her dad.

• Danny Pooley’s Round 34 triumph was his fifth round win so far. His 32-point bumper haul was 12 points more than any of his competitors and ensured he ends ‘March’ joint top with Amy Anderson.

• A huge 17 players are within a one-round swing of taking the lead as we enter the closing stages of the competition.

• The top five participants have played all 34 rounds. The highest-ranked competitor to have missed a round is Mike Griggs, who sits sixth. He missed the very first round back in August.

• The lowest-scoring player Hannah Hornigold only featured in one round. She scored four points and is the only person to have missed 33 rounds.

Arsenal (had the most corners),
10 corners in the game

Congratulations to Adam Tucker who is the winner of the latest £25 top-scorer monthly prize.

He pipped Charlotte Caney, who also scored 72 points for the ‘month’, thanks to having his name drawn out of the hat first for the tiebreaker (TB).

Another £25 up for grabs this month

Remember, £25 is up for grabs again in ‘April’ for the month’s top-scoring player.

This means the player that scores the most points across Round 35 (held on Wednesday in order to get the scheduled number of rounds in before the delayed season is completed), 36, 37 and 38 will pocket the penultimate monthly prize.

Points scored in each round go towards a season’s total where the highest-scoring player will pocket the £250 prize in May.

The competition is free to enter, no registration is required and with
48 points up for grab each round, the two remaining monthly prizes are available for all to win even if you’re only starting now.

The overall £250 prize cannot now be won by any new entrants but some beginner’s luck could land them £25 or £50 before it’s all over!

After the coronavirus break, rounds are often played midweek and more than once in a week in order to get the scheduled rounds fulfilled before the season is completed on Sunday, July 27
(as it stands).

Regular players are in constant dialogue with our columnist Gavin Caney who is happy to take on any new entrants. You can get in touch with him by emailing gavin@yourlocalpaper.co.uk or sending him a message on Twitter @GavinCaney if you want to get involved. As indicated above, points gained from Round 35 (already held), 36, 37 and 38 will count towards April’s top-scorer prize. The player with the most points from these rounds will win £25.

The player with the most points from all the rounds played at the end of round 41 will win the £250 end-of-season jackpot.

If a tiebreak is needed for a monthly prize, the winner will be selected by drawing the name of eligible players from a hat.

Any end-of-season tiebreak willl be decided by who gained the most round wins throughout.

If players cannot be separated that way, the winner will be drawn at random.