King’s Lynn Town Hall is to be lit-up blue and gold tomorrow (Saturday) in celebration of the town’s football club securing promotion.

After weeks of anticipation, the club and its supporters last week received the news they had been hoping for – promotion to the National League and a top-of-the-table finish.

To mark this milestone achievement in the club’s history, West Norfolk Council will flood the Saturday Market Place town hall with the club’s colours during the evening.

West Norfolk Mayor Geoff Hipperson has also recorded a message of congratulations to King’s Lynn Football Club on behalf of the town and borough, which has been posted on social media.

After being promoted to the National League North, the Linnets were in second place  with two games in hand when the COVID-19 lockdown halted the club’s successful run.

In the wake of the promotion news, fans uncorked the bubbly and some met in The Walks last Saturday to celebrate. 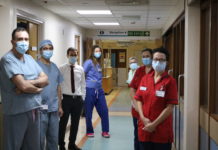