Police have appealed for witnesses after two separate crashes in West Norfolk in which two men died.

The crashes happened within hours of each other and officers  are hoping witnesses will come forward.

They have also asked drivers to check their dash cam footage.

On Tuesday, a man in his 20s died after a collision on the B1145 at Great Massingham.

Emergency services were called to the scene at around 8.40am following a collision between a Volvo S40 and a van.

A spokesman for Norfolk Police said the Volvo driver died at the scene.

The van driver was taken to the Queen Elizabeth Hospital in King’s Lynn with  minor injuries.

A few hours before on Monday night, a man in his 30s died after a two-vehicle crash on the A17 at Terrington St Clement.

The driver of a red Ford Focus was pronounced dead at the scene near the junction of Market Lane.

The crash, involving a white DAF lorry, happened at around 7.20pm.

The A17 was closed at Sutton Bridge while emergency services were called to the scene.

It was re-opened in the early hours of Tuesday.

Officers at Norfolk Police are asking anyone who may have seen the incidents or have camera footage to call 101.

• Earlier during the Christmas period, a man in his 70s suffered serious injuries in a three-vehicle crash on the A47 near Tilney All Saints.

A white Kia Picanto and a Blue Ford Transit collided at around 10.50am on December 23 and a grey BMW was hit with debris.

The Kia driver was taken to the Queen Elizabeth Hospital with serious injuries and was later transferred to Addenbrooke’s Hospital in Cambridge.

The A47 was closed in both directions from the Tilney roundabout to the Pullover roundabout until around 3.30pm that day. Eau Brink Road was also shut.

Police also appealed for witnesses to this crash and anyone with information was asked to call 101. 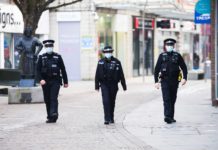 Arrests in Lynn on first Saturday after nightclubs open