Home Port SUMMER AT THE PORT

SUMMER AT THE PORT

Over June and July, 23 cargo ships arrived and 22 departed our Wash port, with 19 and 14 in ballast respectively.

The Cherry Sand returned to undertake further dredging of the docks followed by UKD Seahorse to level off their beds.

This is a French registered work boat fitted with specialist water jetting equipment to deal with re-burial of windfarm cables in the approaches to the River Nene.

The laying of windfarm cables in recent years has increased the work of the King’s Lynn Conservancy Board in safeguarding navigation through The Wash.

The Smit Spey sailed from Peterhead to Lynn for a longer than usual visit for training exercises with RAF personnel.

Lynn continues to import large quantities of timber from northern Europe as the stockpiles visible on the docks estate tell.

Seven ships sailed to The Wash with timber over this period. The Scot Venture carried a full cargo from Varberg in Sweden and the Rig another from Ventspils in the Baltic state of Latvia.

The other five vessels discharged part cargoes from Swedish and Finnish harbours with three via Seaham and two via Hull.

Vermiculite is a mineral used as an insulation material and two ships arrived in Lynn from Rotterdam with full cargoes during this period.

Another two vessels transported loads of aggregate for the building industry from Randers in Denmark to Lynn in what is regular trade.

The Aller (which can be seen in the picture above), carried a cargo of maize from Bordeaux which is a major French Atlantic port from where Lynn once imported impressive quantities of wine.

The Ventura sailed with a full load of wheat from Vierow on the German Baltic coast where several Hanseatic towns linked to Lynn can be found such as Lübeck and Wismar.

Exports were modest in these two months. One ship carried barley from The Wash to Rotterdam and another the same cargo to La Coruna in northern Spain.

Sugar beet pellets were exported by the Eems Dart to Amsterdam in June and returned to load the same cargo for Pasajes in Spain in July.

To Ghent and Amsterdam, the Kruckau and the Ohlau respectively sailed from Lynn with full cargoes of scrap metal. The Kaili transported a third cargo of scrap metal to Moerdijk which is a Dutch inland port up river from Rotterdam where barges transfer loads to sea going vessels.

At almost 100 metres long this ship is the largest vessel to take scrap.

For at least 500 years the state of the harvest has been a key factor in determining Lynn’s seaborne trade because of its extensive agricultural hinterland.

Good harvests have always boosted port activity and we await further news about this year.

Associated British Ports (ABP) is sponsoring a Stories of the Sea competition for school students to mark the 150th anniversary in 2019 of the opening of the Alexandra Dock.

True’s Yard Fisherfolk Museum is a partner in the project. The closing date for the submission of maritime stories is September 30. 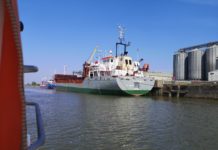 Autumn at the port