The much-anticipated arrival of H&M in King’s Lynn took a step closer this week when the fashion retailer received the keys to its new home in the Vancouver Quarter.

A team is to begin fitting-out the two-storey flagship store in Broad Street on Monday and the first customers will be welcomed in around nine weeks.

It was hoped the Lynn H&M would open in the spring, but the collapse of Chalcroft, the main contractor, delayed building work.

The redevelopment of the former Beales site began nearly two years ago and has created four other new shops, with tenants for these not yet announced.

It is thought the project will create around 45 jobs for the town and prove a major draw for shoppers while re-invigorating New Conduit Street and Broad Street.

Vancouver Quarter manager Alistair Cox, said this week the handing over of the keys was a significant moment in the project.

“H&M will be a great addition to the Vancouver Quarter and will make a real difference to King’s Lynn in terms of its vibrancy as well as offering visitors and local residents even more reasons to visit regularly,” he said.

“We’re so pleased to see this landmark project come to fruition which is part of a major regeneration scheme in the town centre and is a big investment for the town.”

Redevelopment of the site began following an arrangement between the Vancouver Quarter’s owners, LAP and US investment management firm Oaktree Capital, and West Norfolk Council which saw a 250-year renegotiated lease agreed.

Shoppers have been able to get a proper view of the new development after barriers surrounding the store frontage have now been removed.

“This development has come about thanks to a dynamic public/private sector partnership and proves what can be achieved through innovative collaboration,” Mr Cox added.

“We look forward to the completion of their fit-out and the opening of their new store in the heart of the town.

“The presence of the new H&M store brings another major retailer to King’s Lynn.”

The Vancouver Quarter, anchored by Sainsbury’s, Wilko and TK Maxx, currently attracts a footfall of 150,000 visits a week.

H&M has 260 stores in the UK and Ireland with the nearest  at Peterborough, Norwich and Cambridge. 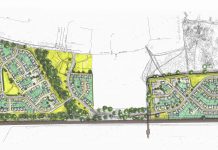 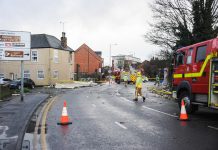 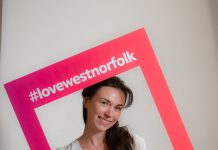