“Not all drink-drivers this Christmas will be young men” – that was the message from Norfolk and Suffolk police as both forces launched their winter campaigns.

Officers are supporting a national drink-drive crackdown reminding people it is not always “the usual suspects” who drink and drive over the festive period.

The campaign, first launched in West Yorkshire in 2016, illustrates deliberate stereotype characters to challenge the public perception about those they think may drink-drive.

The festive crackdown, launched last Saturday, tackles those driving under the influence of drink or drugs and will see officers carrying out extra patrols and roadside checks.

Any driver stopped due to concerns over their driving, a vehicle defect, or involved in a collision, will be breathalysed.

Time slots at Norwich Magistrates’ Court have been reserved to deal with those caught drink or drug driving. This effectively means offenders could lose their licence within 24 hours of being breathalysed while facing additional fines.

Roads policing officers will be using social media to share messages and provide updates on campaign results using @NSRAPT and via Facebook.

During last year’s campaign, more than 3,000 drivers were tested with 152 drivers providing positive readings in total for both counties. In Norfolk 1,320 tests were carried out with 82 drivers failing.

In total, 78 drivers failed drugs tests, with 35 in Norfolk.

Inspector Jon Chapman from the Joint Roads and Armed Policing Team, said: ‘‘Driving while under the influence of drink or drugs is not acceptable, but at Christmas the risks are even more prevalent with darker nights, bad weather and sadly, more people taking the risk by drinking or using drugs and then getting behind the wheel.

“Statistically young men do form a large proportion of those who we stop for drink-driving however, we are seeing more and more men, and increasingly women, aged over 35 who are drink driving, many with the attitude ‘it will never happen to me.’

“It is quite harrowing as many of the people in this age range have been targeted by decades of campaigns about the dangers of drinking before getting behind the wheel.

“Last December, almost 92 per cent of everyone who were arrested for drink driving offences nationally, were aged over 25. 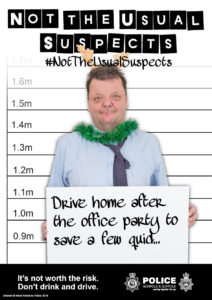 “These are people from all backgrounds, ethnicity and genders. Many of them have professional careers, they may have children and grandchildren and yet they are still choosing to get behind the wheel after consuming alcohol. We want to continue to drive home the message and make drink-driving socially unacceptable, no matter how old you are.

“There could be serious consequences including being involved in a serious collision where you or someone else is injured or killed.”

Norfolk Police and Crime Commissioner Lorne Green said: “While the vast majority of people wouldn’t dream of taking the foolish, selfish and irresponsible decision to get behind the wheel while under the influence, the arrest figures from last year’s campaign show that, unfortunately, the message is still lost on some people.

People are being encouraged to report concerns relating drink or drug-driving anonymously using Crimestoppers at: www.crimestoppers-uk.org

Young film-makers in the frame for history project