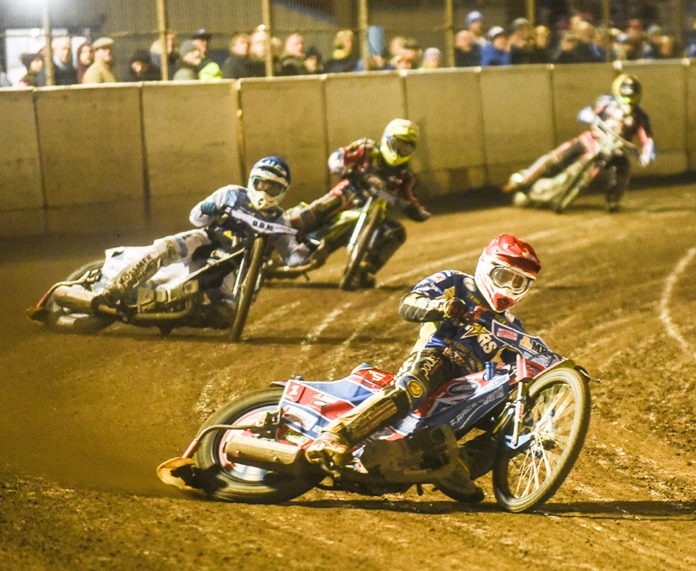 SPEEDWAY: There was more heartache at the Adrian Flux Arena last Thursday for the Tru Plant Stars.

They failed to claw back a 16-point first-leg deficit and missed out on deserved silverware for their hard work and efforts this season.

Rebels reserve Nico Covatti carried on where he left off at the Oaktree Arena 24 hours previously, adding to his 12+3 score from Somerset’s home
53-37 win with a further 12+3 in a 45-45 draw at King’s Lynn.

That proved to be the difference over the two meetings as the Rebels ran out 98-82 aggregate victors to lift the SGB Premiership Knockout Cup.

The Stars fought back after being behind for most of the second leg to gain a creditable draw thanks to the efforts of captain Robert Lambert and the superb Erik Riss.

Team manager Dale Allitt admitted it had been a tough task for his team and said: “It was always going to be hard and to fall even further behind in the first few races just made the task even more difficult.

“But take nothing away from Somerset, they deserved to win over both meetings.

“Not having Tofty (Michael Palm Toft) at reserve has killed us over the past week and it goes to show just how influential he’s been for us this season.”

Captain Lambert piled the pressure on 2017 world champion Jason Doyle in the opening heat before the Somerset man held on to lead a shared race.

But the visitors soon extended their lead to 24 on aggregate with three straight advantages, courtesy of quick starts from Covatti and Richard Lawson as well as guest Chris Harris, who returned to the scene where he celebrated league glory eight days earlier with Poole.

After crashing out of his first outing, Thomas Jorgensen produced a brilliant ride to get the better of Doyle in Heat 5 before Robert Lambert and Riss combined for a first home maximum of the evening.

It was that No.1 and No.2 duo who delivered the goods again in Heat 10 as they both put everything on the line to squeeze by Paul Starke over laps two and three.

But it only prolonged the inevitable as the Rebels sealed the trophy in the next race as Doyle and key reserve Covatti got the better of Niels-Kristian Iversen.

The Stars finished off with three heat advantages, coming from 10 down on the night to snatch a draw – but sadly it was to no avail.

“It’s just such a shame that you work hard all year and success comes down to the roll of a dice,” said Allitt.

“Your achievements are based over 30 heats of speedway and when you’re in the position we are in stood here now, you can understand our frustrations.

“I feel for the supporters but I also feel for the riders as well because they’ve given their all for the club this year and they deserved to have something to show for that.

“Right now it’s hard and we’re still hurting but I really do hope everyone remembers what a fantastic season this has been.

“We topped the top league after the regular season and that was the first time any Lynn side has ever managed that.

“We’ve turned things around from last year as well and we’ve given ourselves plenty to build on in 2019.”