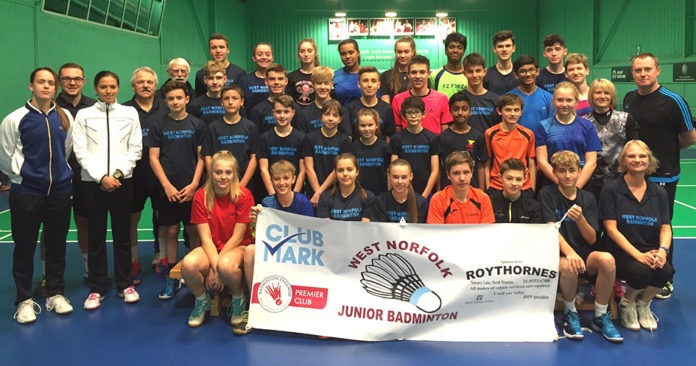 The event, organised by squad manager Roger Cetti was also attended by players from Norwich and Dereham, .

The 32 players, ranging in age from 11 to 18, were put through their paces by England coaches John and Julia Quinn, Liz Cann, and Lydia Powell.

Julia Quinn (nee Mann) is the most successful women’s singles player in England, with eight national championship titles, plus team gold and individual bronze at the Commonwealth games in Kuala Lumpur.

She has been France national singles coach and also coached the Scotland and England national squads.

Cann, from Jersey, is a five-time English national singles champion. She also won six international tournaments, as well as individual and team bronze medals at the 2010 Commonwealth games in India.

Powell was u19 national champion.

The national coaches put the youngsters through their paces, teaching them footwork, technical skills, using multi-feed practices for defence, singles positioning and communication and rotation tactics in doubles.

They used their new skills in a fun competition during the final session, with teams captained by Jess Bateman and Leo Fonzo.

The competition consisted of singles, doubles and triples matches, which finished in 29-27 win for Fonzo’s team.