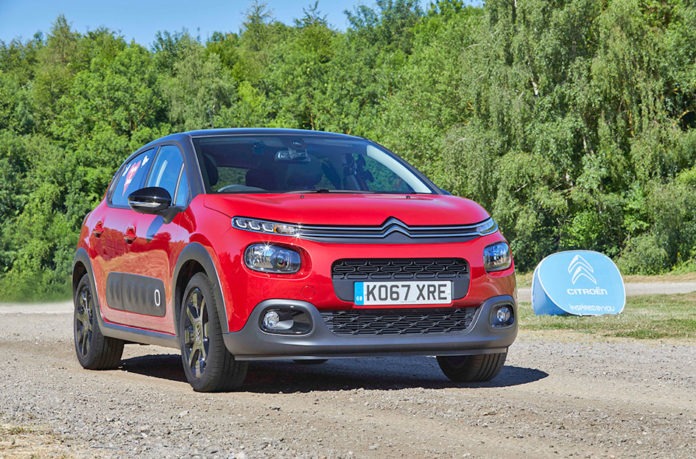 ON TEST WITH
ANTHONY YATES.

I’m going to start by saying I like the design of the C3.

The reason for this conclusion is simple – I personally like a decent compact vehicle that can do all of the things a family man like me wants. Such as the family school run, those weekly trips to the shops, or the odd weekend away. I also like a vehicle that’s able to go where others would normally fail.

Of course, the beefy ride height and flared arches can be a little off-putting for some but believe me, this really is a little corker.

Power and Efficiency: The C3 I had on test was powered by a three-cylinder 1199cc six-speed turbo-charged petrol engine that has 110HP and a very respectable top speed of 117mph, plus a 0 to 62mph time of 9.3 seconds, which in my book is not bad for a three- cylinder. Fuel consumption is also very good with a combined figure of 61.4 mpg.

On the road: It’s a little soft, but into the corners it feels very well balanced. A big plus for the C3 is that it has a decent amount of torque – in fact, 205Nm of it – which allows it to pull very well from pretty much any gear. This surprisingly made the C3 a joy to drive no matter what the road conditions were doing, the brakes also felt good and firm. As for the suspension it actually absorbs England’s bumpy roads really well.

Design and Technology: On the inside, the interior is not bad, but I don’t like how Citroen have mixed up the interior colours. It does have easy-to-read dials and all the controls are in the right place and well set out. There is, however, a small problem for me, Some of the interior plastics feel a little ‘scratchy’ and I would have liked a smoother feel to them. I know you have to spend less to keep the price down for the consumer but sometimes it’s worth going that little bit further if it means you get something that feels a little bit more upmarket.

To sum up: I’m going to give the C3 four stars in this test because of its looks and because it’s worth a look if you are in the market for a compact SUV.