Little did they know when they chose the date back in 2015, their special day would clash with the crucial match and put them in the spotlight too.

Mr Bush, Your Local Paper’s  operations manager and Miss Partleton, who works at Lynn’s Double G Clothing, were interviewed by crews from ITV and footage from their wedding was screened on national television.

The couple tied the knot at 2pm and the England v Sweden kick off was an hour later.

Mr Bush said in the days leading up to the wedding guests had been contacting the couple asking if the game would be screened at the reception.

“Everyone kept asking us  what were we going to do about the football. It was getting relentless,” said Mr Bush.

Camera crews interviewed  the couple live last Friday in their Lynn home as part of the World Cup build-up.

They had also arranged through photographer Paul Tibbs to capture footage of the couple and guests watching the match at the reception at The Ffolkes at Hillington.

Mr Bush, 36, said some of the wedding guests went back to the reception and started to watch the match in the bar while the couple had their pictures taken and when the bridal party arrived, it was half-time and England were 1-0 ahead.

Mr Bush said they delayed the speeches and meal until after the match, which was streamlined through a laptop at the reception.

He said film crews had asked for some staged footage at the reception but Mr Bush explained the cheers were genuine as the bridal party and guests erupted when England scored their second goal.

“You couldn’t have written it if you’d tried,” said Mr Bush, who also made reference to the World Cup victory in his speech.

Their celebrations were shown on national television  several times, posted on social media with around 25,000 views on Facebook

Mr Bush said rather than take anything away from their day, the attention had made it even more memorable.

“It just made our day, it was  a whirlwind, like a dream and being on the TV added to the buzz. We both loved it,” he said.

Mrs Bush, 29, was interviewed and asked how she felt about the match being on her big day and she said it made the day even more memorable.

Mr Bush formerly played for Lynn Reserves and  was part of Norwich City Academy until the age of 15. 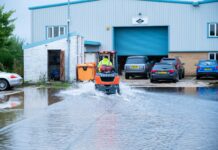