With a month left to go in her role as West Norfolk Mayor, Carol Bower will soon hand over the chain and robe to her successor.

As we sit down to chat about her past year, her broad smile tells me she has loved every single minute.

“I think the word privilege is the only word we can use. I have been to lots of events, schools, clubs, galleries and wonderful concerts. It’s been an exceptional and very special year, she said.

Carol, 70, and her twin sister Suzan, were born in Campbeltown, Scotland.

She returned to Norfolk with her two daughters Kate and Beth and went on to marry Simon.

Carol said of her consort: “He has been superb. I write my speeches in bullet points and then he embellishes them.”

After a 23-year nursing career, Carol completed a science degree with the Open University and became a teacher.

She said: “I did enjoy nursing. Teaching and nursing are closer than you imagine.”

Carol retired at 60 but discovered she wasn’t quite ready to put her feet up so she helped organise events in Hunstanton where she lives and joined the town council.

She served as mayor and deputy mayor and was elected as a borough councillor and became mayor last May, choosing the One-to-One project and the Purfleet Trust as her charities.

She said: “It was unexpected (to be elected as mayor), I was absolutely thrilled. People call you ma’am and open doors for you. The civics office has made one ordinary person feel very special.”

Being borough mayor has seen her meet all four of the Queen’s children.

However, it seems West Norfolk’s volunteers are the people to have struck a chord with her the most.

“It has been so inspiring to meet so many selfless people who are reliable and dependable who enhance other people’s lives for no numeration,” she said.

Carol said there have been many highlights during her stint in office but one stands out in her mind – the 23rd annual Mayor’s Appeal Motorbike Run.

“Sitting at the back of a motorbike doing 60mph was most thrilling,” she recalled.

She admits her favourite visits have been to schools and has learned a lot from West Norfolk businesses.

She said: “I have been very lucky and I hope the next mayor will have a lovely year, as I have had.” 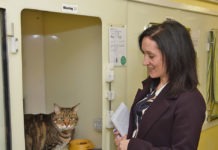 Plenty of cats waiting to be given a home