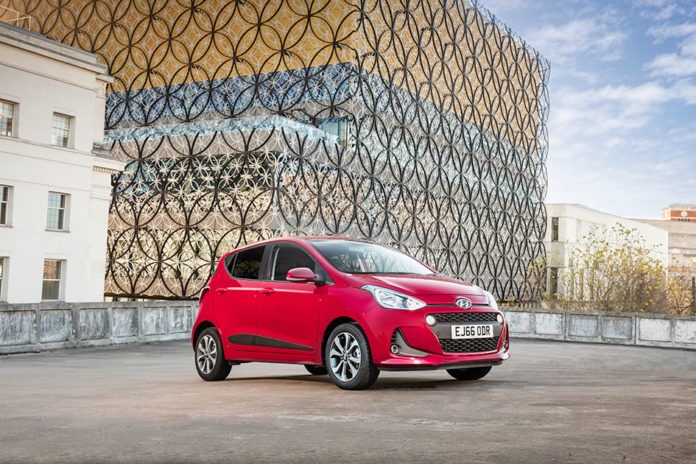 I’m not sure about you, but I just love a small car.

They make me feel all warm inside and you can park them pretty much anywhere.

This week I have the funky little i10 to test and I feel Hyundai has gone all out with this new and improved version. I for one am really impressed by its remarkable ability to work just as well in the city as it does out on the twisty country roads.

Power and Efficiency: My test car was fitted with a four cylinder 1.25-litre, 16-valve, DOHC petrol engine that has 87PS and 121Nm of torque @4000rpm and a top speed of around 109mph. You can also opt for the 66PS, 1.0-litre,  3 cylinder petrol, which will reach a max speed of 97mph, which if I’m honest, is just as much fun to use as the more powerful four cylinder version.

The 87PS engine is actually very refined, and the 66PS is just as good in my opinion, so deciding on which engine to choose is really just a matter of personal choice. You also get a decent five-speed manual gearbox which is slick and feels well in sync with the engine. Fuel economy was also very good and under normal driving conditions, I managed to achieve a figure of around 50 plus mpg (combined) without breaking a sweat.

On the road: I will keep it simple here; the little i10 is the perfect car to scoot about in. It is poised, easy to park and puts a smile on your face. It does feel a little firm but that’s all the fun of the i10. Steering is also direct and the grip levels are good which means the i10 feels tight and taught into the corners. I’m going to say that Hyundai has done a pretty good job of getting the whole package to work together and I have no issues in saying that it performs well out on the open road. It has been a while since I have driven any small car that has felt so connected to the road.

Design and Technology: On the outside, the i10 looks relatively elegant, but it does have a basic look about it on the inside. But, saying that, the little i10 is priced very well for its market, so I didn’t expect it to be festooned with a carbon fibre dashboard or leather seating.

To sum up: The i10 is a decent car that’s packed full of additional extras for very little money. If you are thinking of buying one then I would test both the 66ps and the 87ps version before you decide – although, both in my book are worthy of 5 stars.