Home NatsChats Charity founder speaks out to help others others 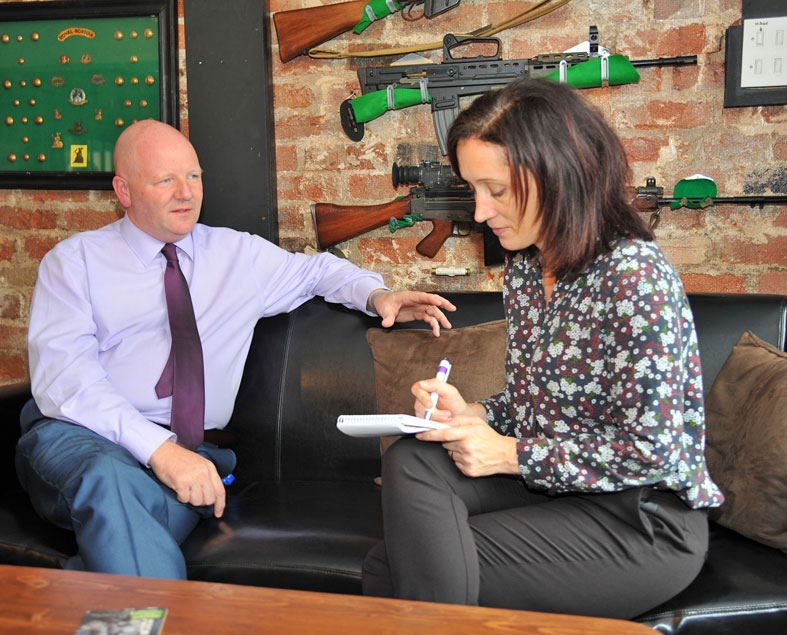 After serving in Northern Island, Iraq and Bosnia you would be forgiven for wanting a rest.

But after hanging up his army boots following 18 years’ service, former soldier Mike Taylor and his  teacher wife Helen, still had a calling to help others.

In 2010, the couple sold everything to set up the charity The Bridge for Heroes in King’s Lynn – the country’s first dedicated facility to offer emotional support for members of the military, veterans, and their families.

The couple, who now have 10-year-old son Jacob, wanted to particularly help people with  the early stages of post-traumatic stress disorder (PTSD).

“We expected one or two people to come in but, in the first year, we had 50,” said Mike, who is now helping around 700 people.

Mike, who was in the Household Cavalry and Royal Armoured Corps, said suicide, isolation and loneliness was on the increase among those who leave the forces.

He explained: “Squaddies learn not to be emotional. Someone once gave me an analogy of it: soldiers are like Lego people – they are taken apart and then glued back together to make super Lego people equipped to deal with harsh conditions.

“But it’s pulling them apart which can be difficult. Their resilience is high, like being able to patrol for 11 days. But, after (leaving the services) they don’t know how to relax and start worrying  – often about the small things.”

Mike has recently revealed he tried to end his life after returning from a tour in Bosnia in 1998.

“Just in that second it could’ve been over,” he said. “And since I have spoken out, people have come forward. I was on radio the other day talking about it and a lieutenant colonel phoned in saying he had also felt suicidal.”

Mike urged people who are feeling depressed to seek help and said there were organisations which could provide support such as Help for Heroes, the Ministry of Defence and, of course, The Bridge for Heroes.

He said: “It takes a person on average seven times to walk through the door to see us. But so far, we have has a 100 per cent success rate.”

The contact centre in Clough Lane is open to the public from 10am to 4pm, Tuesdays to Saturdays, and service personnel and families from all British Armed Services can pop-in for a free tea or coffee.

A year of happy memories as mayor of West Norfolk