A community effort from staff and friends of a Downham Market garden centre has helped to raise nearly £10,000 to support cancer patients.

Tim and Julie Glover, of Downham Home and Garden, presented £9,469 to the Macmillan Cancer Care and Treatment Fund at the Queen Elizabeth Hospital (QEH) in King’s Lynn.

The hospital’s chief executive, Jon Green, accepted the donation. The money had been raised over a year from car boot sales, charity events and performances by band The Strollers.

Mrs Glover said: “It has been a real community effort to raise this money with staff at the centre giving up their time at the various events.

“We would also like to thank Booker’s Cash and Carry for its support.”

Mr Glover added: “We would like to thank the community for their support. This has been a tremendous achievement.”

Mr Green said: “I would like to thank Mr and Mrs Glover, along with their staff and the people of Downham Market, for raising this incredible amount of money.

“The West Norfolk community is an important part of Team QEH, without them we would not be able to do what we do.”

Health chief urges people to have flu jab this winter 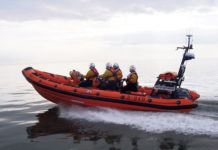 Masterclass in oils in aid of lifeboats