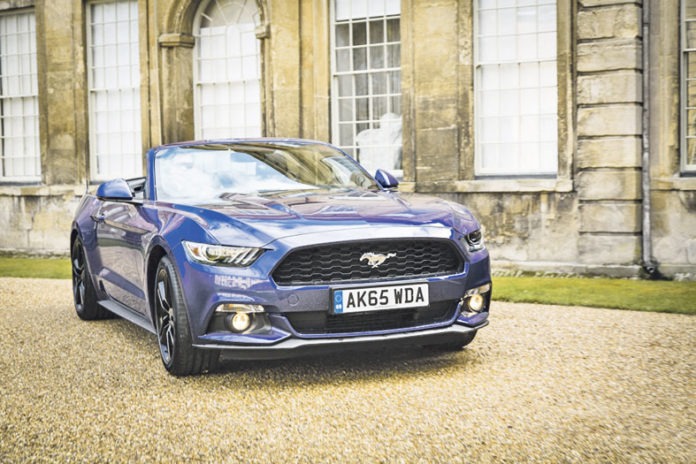 Towards the end of last year, I tested the V8 Mustang, a car that for me has it all.

It’s a car that makes you smile, happy that it will pretty much make anyone who comes into contact with it go all giddy with excitement.

So, with the Mustang 2.3 EcoBoost now sitting on my drive, has Ford gone and ruined it by fitting it with smaller engine? Well, in short, the answer is no. The reason for this is simple – the Mustang is probably one of the most iconic cars of its time and no matter what’s under the bonnet, people love a Mustang.

Power and Efficiency: My test car was powered by a 2.3-litre engine with direct injection and twin-scroll turbocharger. Maximum power comes in at 317PS with the addition of 432Nm of torque. Maximum speed is  around 145mph and a 0-62 time of around 5.8sec (manual gearbox).

Of course, I know must of us want a V8 Mustang in our lives, but there are some of us who want the economy side too. So, in keeping with that, Ford went that one step further and installed the EcoBoost engine which, I have to say, has been specially tuned to combine the performance you would expect from a Mustang, but with better fuel economy to keep all those green people happy. Plus, as much as I love a V8, I’m not against the 2.3 because I also want a car to be usable without the need to visit the petrol station all the time.

On the road: As with the V8 I tested last year, the 2.3 EcoBoost is still a joy to drive no matter where you are going or on what road surface you drive. Also, as the Mustang is rear-wheel drive, you can dial-in the power a little softer with the 2.3-litre engine, which for me, makes it that little bit more tamer to drive than the V8 version, only just though.

Into the corners it felt planted and not cumbersome at all. Don’t forget the Mustang now has ‘normal’ fully independent suspension which makes the car more agile. If you also factor in the limited slip differential then you can be assured of something stable and thrilling.

Design and Technology: It’s all about presence on the road when owning a Mustang. Even if you do opt for the 2.3 EcoBoost version – people will still stare, point and say: Wow! It’s a Mustang.”

To sum up: The Mustang is an epic car in either version.