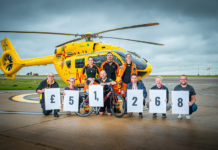 A DAD has spoken out about the brazen brutality of Spanish police, after he and his daughter were attacked with batons before the Atletico Madrid, Leicester City Champions League football match on Wednesday.

Mr Evans, 57, of Wootton Road, King’s Lynn, told YLP that both sets of fans were having a “great time” and that there was “no trouble” as they sat in the sun in Madrid’s Royal Plaza.

Mr Evans said: “We were in a bar for a couple of hours and everything was really nice, really friendly. I popped down to the toilet in the basement for a couple of minutes and by the time I came back up it had all kicked off. The shutters were down on the bar front. Aimee was locked out and I was locked in. I asked the bar owner what to do as I needed to get to my daughter. He said it was dangerous and unsafe and that police were  rounding people up, but told me to leave through the back entrance.

“I went out and round to the front to find her but couldn’t. There were riot police everywhere. I told one I was looking for my daughter and asked if he knew where she was and he just hit me with his baton across my stomach and ribs. I asked him three times and he hit me three times.

“Then a more senior officer asked why I was being hit and I told him. At that moment, Aimee came out of the bar as she had been pulled inside for safety because someone had seen her sitting on her own.

‘She started filming what was happening on her mobile and that time a police officer smashed her across her back and shoulders with a baton and then her hand to stop her filming.

“Paramedics turned up and we were both treated in front of the police.”

The pair then made their own way to the football stadium about a mile away.”

“We ended up sitting with the Spanish supporters again and there was no trouble.

“It was a pleasant afternoon of enjoying the sun, drinking, playing football and talking about the game before we went to the match.

“It was all marred by the actions of the police.

“They should police by consent, not hit young women sitting at a table.

“It was completely unnecessary.”

The pair had flown out with other fans and the players on a Leicester City chartered Thomas Cook flight from East Midlands Airport on Wednesday morning, after which four coaches shuttled them into the city centre.

They had been sight-seeing and souvenir buying before the incident. Leicester lost the game 1-0 and host Atletico in the second leg.