Lucky family dog Oscar has survived an horrific accident after he was impaled on metal fence spikes, ripping his stomach apart like a “kangaroo pouch”.

The one-year-old black and tan, Springador, spaniel-golden retriever cross-breed, got hung up on the 100-year-old fence after running away from owner, Natasha Selkirk, while on their usual Saturday walkies in Harpley village.

But it was only after Natasha’s sister, Katie Boucheron, posted a plea for help and advice on what to do from fellow dog lovers on website Dog Friendly UK that much-needed cash for an emergency operation poured in from around the country, thanks to website users Artic’s Legacy.

“We were out on our Saturday afternoon walk when he just got away from me. I found him upended on the spikes of the metal fence that runs quite a way around our village.

“His stomach was ripped apart like a kangaroo pouch. It was that open, you could have put another dog inside. I can’t get the image out of my head.

“There was a ring of hair and the top spike was going right through him.

“I don’t know how I managed to get him off, but somehow I got him up the other way and lifted him off.

“He was just so still, dead still on the spikes. No whimpering, just silence.

“No one is to blame, the fence has been in the village for around a hundred years I think.”

Single mum-of-one, Natasha, is currently working reduced hours at her job as assistant manager at Hunstanton’s Cafe Thai, because of injuries sustained in a car crash.

As a result, she stopped paying pet insurance before the accident and was forced to phone the RSPCA for help.

The RSPCA had to ask Natasha to sign Oscar over to her before  it was able to pay for emergency surgery at Vets4Pets in Lynn’s Campbells Meadow.

However, because the online plea dog lovers around the country chipped in within 24-hours to raise the £650 needed top sew up the poorly pooch.

Natasha, whose son Ryan, attends Litcham High School, added: “The last thing I wanted to do was rip him more when I lifted him off to get him to the vets, but I couldn’t leave him on the spikes either. The power of adrenalin just took over until I got him to the vets and then I just cried.

“The vets were just brilliant.”

Oscar was facing a further operation today, again needing donations. Go to Facebook page Our Hero Artic’s Legacy Non-Profit-Making fundraising to help. Natasha added: “We are just so overwhelmed by the generosity of dog lovers who have helped us when we were in such a dark place.

“We didn’t ask for money, just advice, but within 24 hours it was all paid for. Now people want updates on Oscar’s wellbeing. We will be forever grateful. I hope one day we can repay the kindness.” 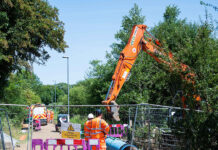