A wood fire in North Runcton  is expected to keep burning for at least another week.

Firefighters were called to Manor Farm at around midday on Saturday where around 40,000 cubic metres of waste timber was on fire and have remained on site since.

The fire service used water to control the spread to nearby buildings and is now overseeing a controlled burn which is expected to go on until the end of next week.

In a joint statement the fire service, police, West Norfolk council and the Environment Agency warned residents to stay inside where possible and added: “Any smoke can be an irritant and as such people are advised to avoid being in the plume as far as possible and to avoid contact with any smoke deposits. 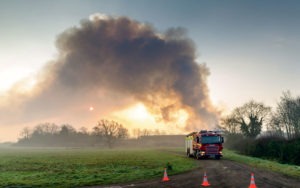 “As a precaution, residents within the local area are advised to keep windows and doors shut, and avoid spending unnecessary time outdoors.

“Motorists who have to travel through the plume should keep windows closed, turn off air conditioning and keep air vents closed.”

Chequers Lane was closed this week and the joint statement said due to an expected change in the wind direction, it was likely residents in South Lynn and the Hardwick Roads areas would smell odour from the burning.

Environmental Health staff from the borough council will be undertaking daily visits to assess the impact of the plume.

To date, local rivers and ground water have not been polluted but this will continue to be monitored.