Sunday’s wintry weather failed to dampen the spirits of the many people who turned out for the festive lights switch-on in King’s Lynn.

Actor Paul Barber, who played Denzil in the smash-hit BBC series, Only Fools and Horses, was the special switch-on guest.

He joined other guests on stage in the Tuesday Market Place for the countdown with West Norfolk Mayor and Mayoress, David and Linda Whitby, helping to perform the honours at around 4pm.

The switch-on event, organised by West Norfolk Council and the Vancouver Quarter shopping centre, saw street entertainment, costumed characters, musicians, Santa Claus in his grotto in New Conduit Street and some of the performers from this year’s panto, Cinderella.

The panto, at the Corn Exchange, stars EastEnders actor Matt Lapinskas and runs December 9 to 31. 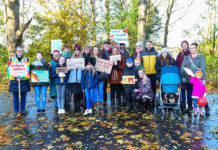