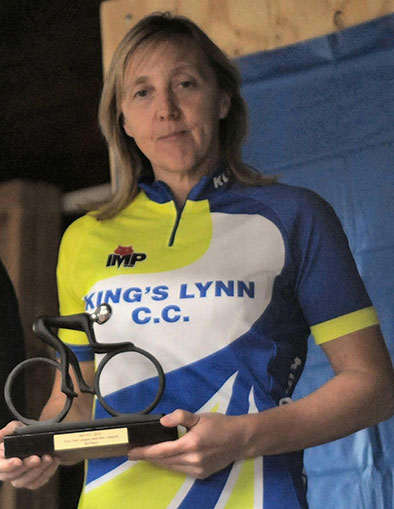 CYCLING: Kay Burgess crowned a successful season with a pair of awards from the Women’s Eastern Racing League.

The King’s Lynn Cycling Club member has been competing in time trials and road racing and achieved third place in the time trialling road league category and a similar position in the masters (over 40s) category.

ABCC coach Gary Smith said: “Kay has had a superb season. As her coach I have seen the sheer hard work and determination flourish.”

The one-mile climb up Flitcham Hill was hosted by Lynn CC and saw 33 riders competing against each other to see who was the fastest.

As well as home and visiting senior riders, Lynn’s Bethany Barnett took part in her first time trial event at the age of 12.

Pett proved fastest up the incline, clocking 2.32, followed by Matthew Webster of Loughborough CC in 2.36 and Ben Keeley of TVV in 2.40.

The highest placed Lynn rider was James Senter in 2.41.

The club thanked Flitcham Community Hall for allowing its use as event headquarters.