Proud young footballers will be kicking-off this season in style wearing a new kit.

Reffley Red Under Eights have gone from playing in hand-me-downs to sporting a smart kit, thanks to sponsorship from King’s Lynn firm, Gus Auker Pipe Installation.

Team  manager Jason Brewer was so delighted with the kit, he asked Your Local Paper if we could record the moment.

He said: “We didn’t have a kit last season and had to wear a hand-me-down kit which was several years old but none of the parents complained.”

Mr Brewer said the team had three managers in as many months and he was asked to take on the job which he did just before Christmas.

“As a parent, I was approached and decided to keep the team together.

“They are a great bunch and made so much progress last year and only lost to four teams.”

Mr Brewer said at one tournament, a Leicester City FC scout took his details because he was impressed with several of the players and was looking to develop possible club links.

“They are really chuffed to have a new kit and unlike some other teams, no-one has left as they all want to play in their new kit,” he added.

The youngsters train on Thursdays at Reffley Community School in Lynn from 5pm to 6pm. 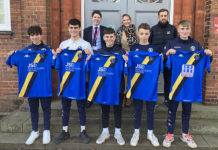