Carl Breeze retained his position at the head of the Michelin Ginetta GT4 SuperCup after a win and second place at Oulton Park saw him keep his HHC Motorsport teammate and closest rival, Jamie Orton at bay.

It was once again a HHC top three qualifying lockout as Orton claimed his third qualifying pole position of 2015 with teammate Breeze alongside and Will Burns behind.

A storming start for Orton saw him hold off the West Norfolk-based championship leader into Old Hall for the first time, their teammate Burns wasn’t quite so fortunate, however, as Tom Oliphant took third from him.

Breeze hassled Orton for most of the encounter, providing spectators with lots of
edge-of-your-seat moments in the process, but was unable to get past.

The second race saw Orton remain in pole position, and with his car angled to block Breeze off the line, it was no surprise to see him lead into Old Hall at the first time.

However, this time his lead was short lived as he overcooked the entry into turn one at the start of lap two and gifted the advantage to Breeze, only to retake the position after cutting the chicane at Knickerbrook a few laps later.

Although Orton held on to the lead to the flag, a 1.4-second penalty following the race handed the maximum points haul to Breeze. 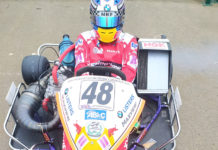 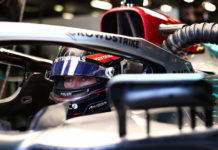 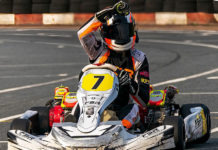