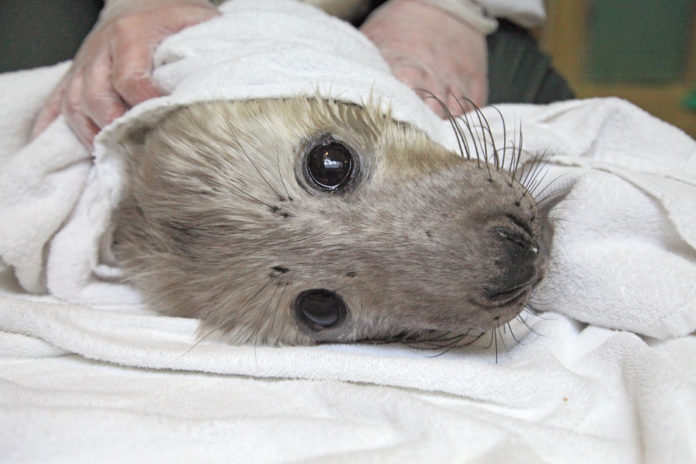 Staff at the RSPCA East Winch Wildlife Centre have warned that a seal crisis is looming.

With the busy winter seal season approaching, pens at the Station Road centre are already  filling up with poorly pups.

The number of seal admissions  increased by 61 per cent last year following the tidal surge, which left more than 100 pups needing care.

East Winch is among four RSPCA Wildlife Centres across the country. They see hundreds of both common and grey seals go through their doors each year and staff are expecting this year to be no different.

The influx of pups was the largest staff had seen in the centre’s 25 year history.

Because the seal pups were so young, each one needed one-to-one care and feeding with  stomach tubes at three-hourly intervals in order to survive.

Centre manager Alison Charles said: “Winter typically brings on stormy weather which can cause huge problems for seals and their pups.

“If we experience the same kind of storm battering we did last year then it will be tough.

“The 108 pups we had in really stretched us because they require a lot of intensive care. We really couldn’t have managed without the staff and volunteers’ good will and doing extra shifts to make sure the pups were fed. They were vital.

“The rehabilitation of seal pups is a real marathon, it can take months for them to become fighting fit, strong and healthy enough to be released back into the wild.

“Space really was at a premium last year and our existing cubicles were having to house four or five seals rather than the usual two, while other animals were having to take up residence in other areas of the hospital in makeshift pens so that we could make room for as many animals as we could.

“We had swans in the operating theatre and hedgehogs in the visitor centre. There were animals everywhere!

“We had so many come in to us in such a vulnerable state all at the same time it was a mammoth task. The level of care is so full on. It took a lot of hard work to get them through such a difficult time and we couldn’t have done it without the public’s help.”

It costs around £22 a week to feed each seal.

Visit www.rspca-eastwinch-wildlifecentre.co.uk to find out how you can help.