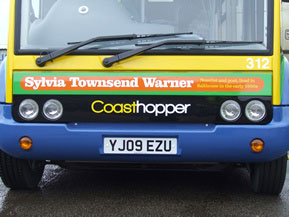 The future of a popular coastal bus service has been secured, it was announced yesterday (Thursday).

Agreement has been reached between Norfolk County Council and Norfolk Green to keep the service from King’s Lynn to Cromer operating.

The bus will run every half-hour during the summer months and hourly during the winter until 2015 under the terms of the new agreeement.

There had been fears over its future and the county council is continuing to look at options for the service, which carried more than 500,000 passengers last year, to run beyond next year.The council will fund the winter service while the summer timetable will have no subsidy.

“The Coasthopper represents a vital means of transport for many residents in West Norfolk and across the North Norfolk coast, so I am very pleased that between us and Norfolk Green we have been able to secure its future for the medium term,” said Toby Coke, chairman of the  environment, development and transport committee.

“Coasthopper is a superb example of partnership working between public and private sectors. The effort and investment put in since the service started in 1996 has produced the success story we see today,” said Andrew Dyer, MD of Norfolk Green, which is now part of the Stagecoach group.