The arrival of the first Common Seal pup marks the beginning of the season, with large numbers of pups due to be born along the coast in the coming days.

During the season, staff can find they end-up dealing with high numbers of sick and injured seals.

The first arrival has been named Kwacha and is two weeks old. She arrived with her umbilical cord still attached and was underweight.

Staff at the centre are giving her liquidised mackerel every three hours via a feeding tube into her stomach.

“Usually the two seal species come at different times of the year. Common seals have their pups in the summer and grey seals in the winter.

“However, this year has been unprecedented as we were caring for an additional 100 pups since December who were washed up along the shore following violent storms,” said Alison Charles, centre maanger.

There are stilll 11 grey seal pups at East Winch.

Members of the public are being asked not to assume the common pups are abandanoned, as a parent can often be nearby. If the pup is injured, do not approach it, but call the RSPCA.

A message of thanks 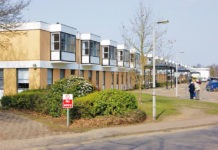