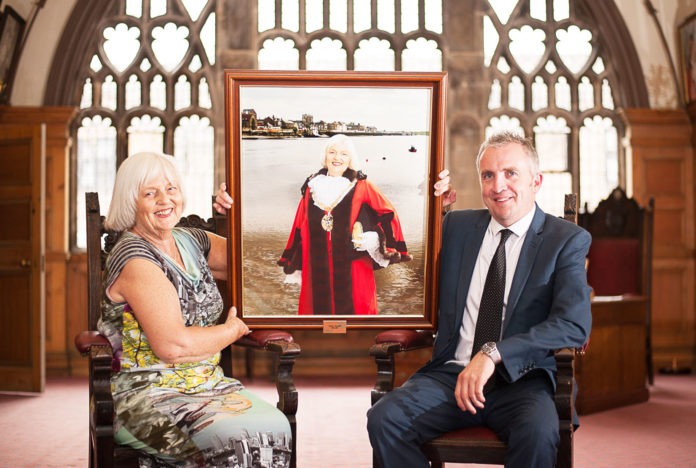 Outgoing West Norfolk Mayor Elizabeth Watson chose to do something a little different when she sat for her official portrait.

The Hunstanton councillor posed on the steps of the King’s Lynn Ferry with the town’s distinctive skyline rising behind her.

Commissioned by Your Local Paper, the photographic portrait now hangs in Lynn Town Hall alongside those of all the other former borough mayors.

But, unlike a majority of her predecessors, Mrs Watson decided to be outside in the open without the traditional props, such as swords or maces.

“I am thrilled to bits with the portrait,” she said.

“I looked at all the other portraits and thought ‘how can I do something a bit different?’

“The picture is fantastic because it shows the whole of the quayside, including the Minster, and for me, that is King’s Lynn.”

Mrs Watson, ward member for Hunstanton, handed over the chains of office to the current borough mayor, Barry Ayres, earlier this month.

“My year was absolutely fabulous – I was exhausted by the end of it, but it was an amazing experience and a huge privilege,” she added.

“It was a rollercoaster.”

Alan Taylor, managing director of Your Local Paper, said it was a pleasure to be involved.

“Elizabeth did West Norfolk proud while serving as mayor and I have always enjoyed working with her.

“I’m so impressed by the portrait and it looks beautiful in the mayor’s parlour.”