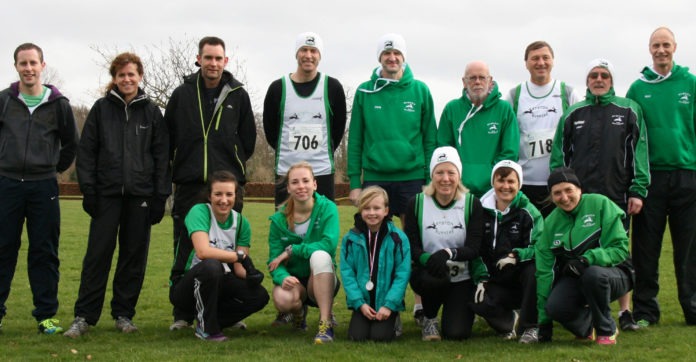 ATHLETICS: A busy weekend for Ryston Runners AC reflected both the versatility and expertise of the club’s members.

Preparing specifically for the London Marathon, four went to the Tarpley 20 to get in some useful race condition mileage.

Malcolm Tuff ran a blinder, in windy conditions, knocking some six minutes off his own personal best and club M45 record, for second vet and seventh overall in 2:02:16.

λ Twenty members were at the West Norfolk AC Houghton cross country meeting, winning the club of the day title.

Shaun Mann bagged first place in the M35 category with Ian Hogarth third, David Lane taking the same position in the M45 race. The M50s were led home by Ian Todd, with Martin Blackburn (fifth) and Keith Morris (sixth) in support. Jeff Reed took silver in the M60s and Mick Ennis wrapped up the M70 category.

Junior athletes also went well-medalled. Annie Rooks secured gold in the u15 girls’ race, Anna Wood and Mia Moore took silver and bronze respectively in the u11s and Bea Honeybone was sixth in the u9s. For the boys, Harry Wakefield was third in the u11 race, in which Josh McGuire was ninth.

λ Three athletes were in action at the Eastern Veterans Athletic Club in an eight-sided Inter Area Challenge Match at Lee Valley. The East came out victorious by one point.

Gaye Clarke secured maximum points in the W50 60m hurdles and high jump, Cath Duhig was second in the W50 2000m walk, and Paul Harrison fourth in the M35 triple jump. Clarke and Harrison also ran superb relay legs in the 4x200m to help their teams to victory.