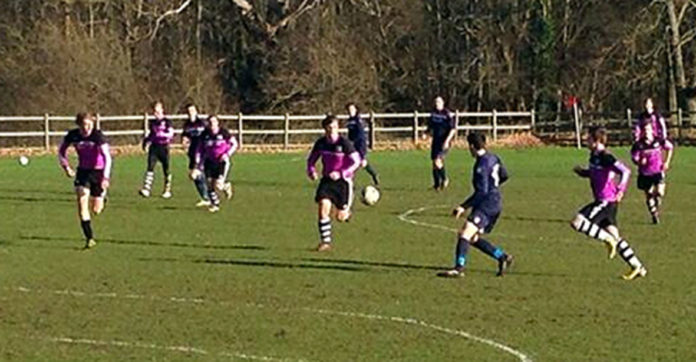 In a game held in Lincolnshire against a team from Cambridgeshire, the winners progress to the Norfolk-based final. Long Sutton went into the game confident of reaching the final with March having somewhat temperamental recent form but it wasn’t to be as Saracens marched to the final with a 4-2 win.

Paul Newcombe and Joe Harrison got the Lincs side on the score sheet but it wasn’t enough as D Moore and a back to form Jermaine Watson hat-trick sealing their passage to the Fakenham final against either CR Eastern or Hunstanton, who play this Sunday.

CR Eastern took on the only remaining Division One side in the Hardy/Sheen, and undoubted favourites, Terrington.  Unfortunately for CR Eastern, they found a Terrington side ready to come back from last week’s shock Cherrington Cup exit.  Six goals without reply were scored by the men from The Memorial Field. A result which sees them progress to the semi-final to take on March Saracens, away, this Sunday.  Matt Prudence grabbing a treble, and there were singles for Joe Jackson, Robbie Palmer and player/manager Gavin Caney.

FANG exacted revenge for one of only two league defeats all season, by brushing past CSKA Emneth 6-0, to ease the memories of their 4-1 defeat earlier in the season. FANG also showed great bounce back after last week’s 5-0 humbling at home to Chilvers. Jo Malby grabbed a brace and the other four goals were from Alex Vincent, Corey Brady, Sam Garner and Michael Wood.

Chilvers moved top for the first time this season and are still unbeaten as they eased past Wisbech Wanderers 7-2.  Ricky Hunt notched twice for Wanderers, still rooted to the bottom, with Neil Goodbourn scoring three for Chilvers, and Danny Jezeph scoring four.

All three games went ahead but only courtesy of a late pitch change at all three.

Hustlers, moved from River Lane to Kingsway, went down 0-3 at home to Fleet in a battle between the Division bottom two.  Hardy (2) and Thurlow scoring for Fleet, for only their third win of the season.

Maids Head, also moved to Kingsway from River Lane, went down 4-2 to a resurgent Adrian Flux.  Kieran MacKender nabbing a three-piece with Shaun Dickerson getting the other.  S Hunt and C Barrett were on the score sheet for Maids.

West Lynn played their home fixture with Flitcham Bell at Flitcham and were seen off 3-0 by the Winking Owls of Flitcham. Dan Fuller scoring all three. A big thank you to Flitcham for offering to host.