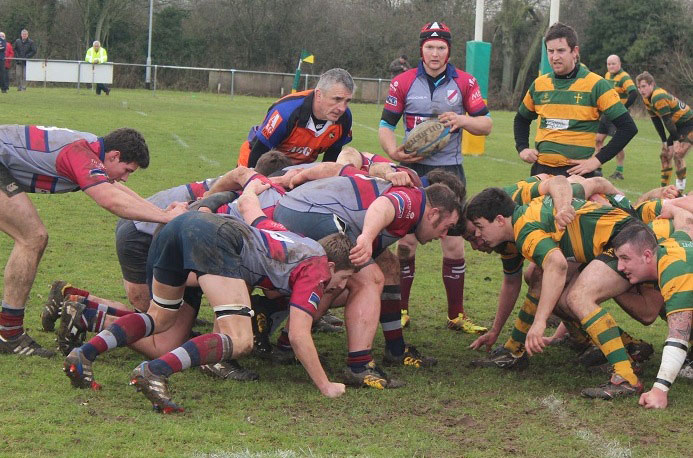 West started with the advantage of a slight slope and wind in their favour but a quick thinking tap and go following a West infringement saw the Crusaders scrum half dart over for an early 5-0 lead.

But full-back Ross Biggs cut a sublime line to notch the visitors’ first try and bring the scores level.

Scrum half Ollie Ridout capitalised on a Crusaders mistake by hacking through a fumbled ball to pounce and score a second try with Brad Cook’s conversion giving West a 12-5 lead.

Cook cleaned up after a miss throw at the line-out to power through the defence to score his fifth of the season and added the extras. Crusaders hit back to trail 19-12 at the break.

West upped their tempo in the second half as their superior fitness began to tell and a series of quick rucks saw Cook crash through for his second try.

The visitors looked strong in the line-out, thanks to the jumping combination of Dan Stephenson and Max Rust and a tremendous catch and drive on the right hand side ended with prop Lawrence Savage crashing over.

Winger Jake Richardson accelerated past the flailing Crusader tacklers to add West’s sixth try before the hosts hit back with a try to bring the score to 40-19 in West’s favour.

Fly half Ed Maule rounded off the visitors’ tally after he collected his own kick and chase ball up the left flank, handing off the Crusaders defender to score in the corner.

West manager Nigel Richardson said: “It’s been a while since we’ve won well like this at Crusaders and it’s testament to the team character how they battled away against a very physical side.”

Tulip Man of the Match award winner was Brad Cook.