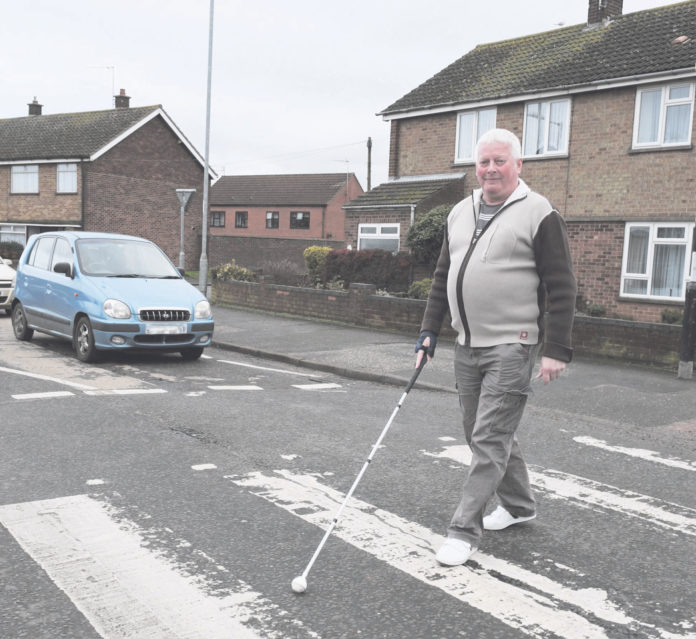 A blind King’s Lynn resident who has had several near-misses at zebra crossings, is urging drivers to be more considerate and stop.

Paul Smith, who uses a white cane, said he had been beeped several times at crossings in the town and said cars sometimes didn’t stop at all, even if  he was on the crossing and in the road.

“Cars jump straight across and I can’t see what’s happening. They just don’t think,” he said.

Mr Smith, who lost his sight in 2007, said negotiating Lynn was becoming harder all the time for people with visual impairments.

“Cars and vans often park on pavements and it forces us out into the road to get round them. It’s just dangerous and it happens very often – they don’t leave room,” he said.

Mr Smith, of Columbia Way, said he wanted drivers to be a bit more considerate to those who could not see what was going on.

“It is thoughtless really because we can walk into the vehicle as we don’t expect it to be on the pavement.

“There’s a lot of things on pavements which cause us problems – including tables and chairs outside cafes. It would be really helpful if they had a barrier or something round them so people like me don’t walk into them and hurt ourselves,” said Mr Smith.

West Norfolk Council is the authority responsible for street furniture.

“Using outdoor space in the retail area can help businesses to promote themselves or develop their businesses. However, we appreciate the need for the street to be easily navigated by all, including people with prams and those who have visual impairments or disabilities that hamper mobility,” said a spokesman who added the council was looking to formalise its approach with code of conduct.