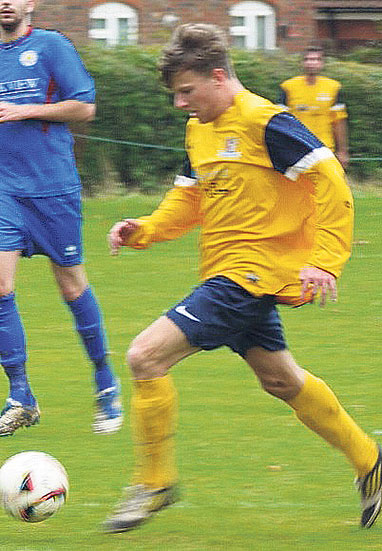 A goal from Lewis Curson five minutes after half-time was enough for Robbie Back’s men to clinch all the points and stay firmly in the hunt for Sterry Cup glory.

Rovers should have been given a penalty when Trevor Daniels was tripped inside the area but the referee booked him instead, claiming he had dived.

Rovers started the second half more brightly and the lively Curson was denied by the home keeper.

But he made no mistake soon after when he coolly slotted the ball home from 10 yards.

Rovers had their backs against the wall for the last 20 minutes when the whole team defended superbly as a unit.

They also rode their luck at times with St Andrews hitting the crossbar and also missing a sitter from six yards.

Manager Back said: “If we have any chance of finishing in the top three, this was the sort of battling performance from the team that would give us a chance to be there at the end of the season.”

Men of the match were Tim Kirby and Gary English.

Downham Town Reserves moved off the bottom of Division Three, thanks to a goalless draw at home to Blofield United Reserves.

They climbed two places in the table after a second match without defeat, having lost their previous eight.

Second half goals from Ian Prudence and Matthew Prudence kept Redgate Rangers on target for a second consecutive divisional title with a 2-0 win over Thorpe Rovers.

Having rattled up 29 goals in their previous four matches, the goals dried up in a 2-0 home defeat.

It ended a run of eight wins, going back to a 4-1 defeat at Mulbarton in the reverse fixture in October.

No such problem for Gayton United who completed a comprehensive double over East Harling Reserves.

Having beaten the South Norfolk side 9-2 at home earlier in the season, Gayton turned it into a 16-goal demolition job with a 7-1 away win.

Congratulations go to King’s Lynn Junior FC who had their Charter Standard approved on Monday.