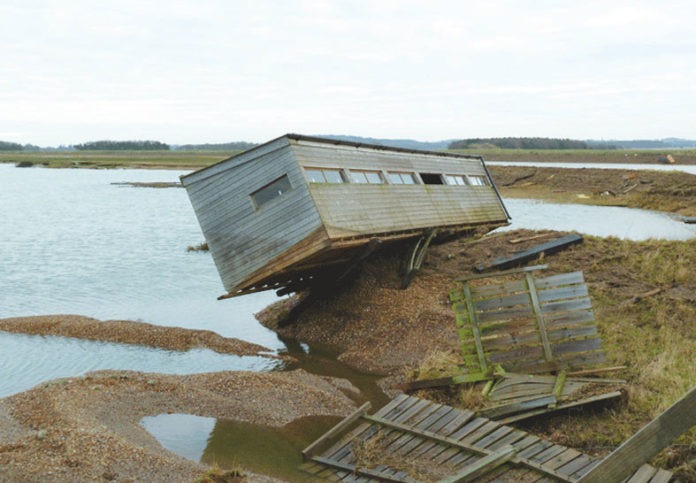 The RSPB has launched an urgent £300,000 appeal to repair some of the east coast reserves devastated by the recent floods.

Snettisham reserve suffered the most extensive damage during the tidal surge earlier this month, with one birdwatching hide being completely washed away and another toppled over.

The RSPB warns the reserve is unrecogniseable, with the access roads flooded and badly damaged, the shingle bank breached and the lagoons used by wintering birds full of seawater.

“The nature of the storm surge has meant the landscape has been changed forever,” an RSPCA spokesman said.

Along the coast at Titchwell Marsh, officers report the walkway down to the beach is “in tatters” and 30ft sand dunes have been flattened by the surge.

The damage would have been far more severe had it not been for the £1.5m coastal change project at the reserve, which began in 2009.

A buffer zone of salt marsh has been allowed to build up, protecting vital habitats further inland.

“Had it not been for the Coastal Change project a few years ago, it’s safe to say the site would have been completely devastated,” a spokesman said.

The charity’s insurance covers the cost of the damaged hides, but not the repairs to its  wildlife habitats.

It has launched a £300,000 appeal to rebuild the reserves at Titchwell, Snettisham, Havergate Island and Dingle Marshes in Suffolk, and encourage wildlife to return.

Rob Lucking, RSPB manager, said: “The devastation to some of our nature reserves has been immense, and we’re still not sure of the full impact.

“But it will take a lot of hard work and resources to put it right and restore these homes for nature.

“We are still assessing the damage, but estimate that the cost of repairs could be many hundreds of thousands of pounds.

“That is why we’re setting up an emergency fund – a pot of money that we can use to get our nature reserves back into shape and repair the damage caused.”

Snettisham and Titchwell reserves have re-opened to the public.