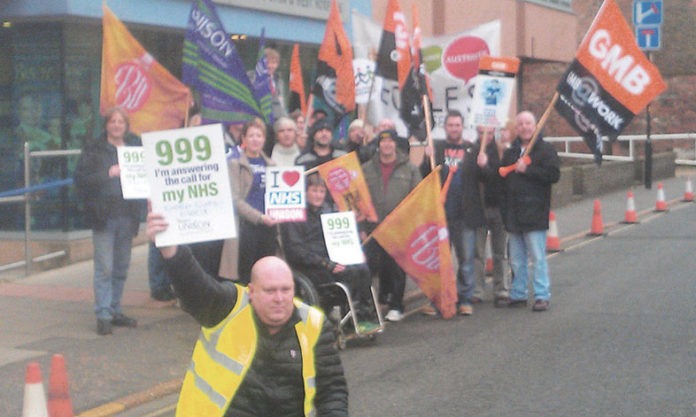 Protestors gathered outside the West Norfolk Council offices  in King’s Lynn yesterday morning ahead of a clinical commissioning group meeting.

Around 30 people lobbied outside the council building, on Chapel Street, with placards, flags and T-shirts.

The West Norfolk Clinical Commissioning Group (CCG) met at the venue and  campaigners were urging members to support the Queen Elizabeth Hospital (QEH).

Many campaigners were from Unison, the national health union. They said they feared that local GPs could start sending patients to other hospitals in light of the recent problems at the QEH.

They also claim that QEH services could be closed if patients are referred elsewhere and the funding went with them.

In October, the hospital was placed in special measures by the Care Quality Commission (CQC) after failing to meet essential standards of care across the board.

Major steps have been taken by the hospital to combat the criticisms levelled at it.

David Dean has been appointed the new interim chairman of the QEH Hospital Trust while Manjit Obhrai, the medical director who helped improve performance at the troubled Mid-Staffordshire NHS Trust, has been brought in as the interim chief executive.

Jeff Keighley, regional organiser of Unison, was at the council offices and said that action needed to be taken.

“The hospital is under-funded and is in a real financial problem,” he said.

“They have to start making cuts because obviously without money the hospital will struggle. They also have to increase the quality of care before December 31 (deadline given by the CQC) but have no funding to do so.

“We fear that GPs might start sending patients elsewhere and obviously we don’t want that to happen. The CCG needs to ensure  the hospital is funded properly.”

Darren Barber, secretary of Unison’s QEH branch, said: “The QEH is one of the biggest employers in West Norfolk.

“We have the facilities that we need to serve the public. We should be protecting our services, not taking them.”

A spokesperson for the hospital said  the QEH’s accident and emergency department was not under threat.

He said four new consultants were being appointed to the department which was already at the centre of a major improvement project.

The CCG buys services from a range of providers, including the QEH, for patients.