Home News Cooking up a storm 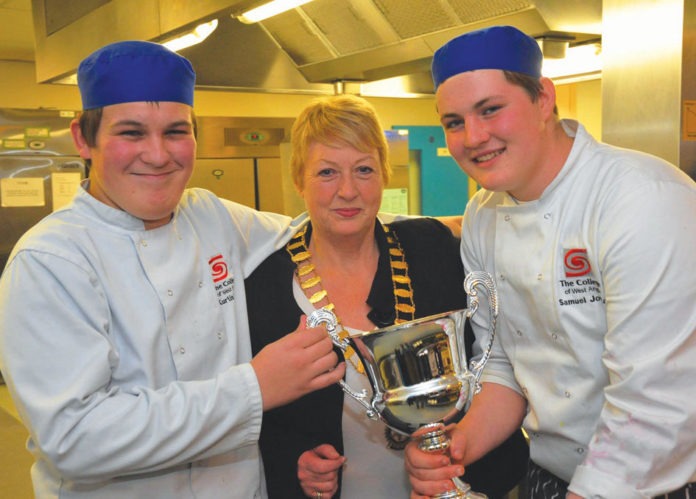 Young chefs have gone head to head in a competition at the College of West Anglia in King’s Lynn.

Second year students on the professional cookery course  spent two hours preparing a three-course meal which needed to be healthy and cost less than £15.

The competition was held on Tuesday and supported by Trinity Rotary Club.

Judges on the day were Les Philp, owners of Grants restaurant in Lynn’s Norfolk Street and experienced restauranteur Colin Rushmore.

Sam Jordan, 17, from Wisbech was named the winner and Kurtis Eagle, also 17, from Swaffham was runner up.

Sam was presented with the Matthew Hunt memorial trophy, named after a former hospitality student who died of a brain tumour in 2009 at the age of 17.

The trophy was presented by Lesley Bambridge, Trinity Rotary Club’s first female president, who was accompanied by other members.

Both judges said the meals served by Sam and Kurtis were of an extremely high standard.

Mr Rushmore said Sam’s soup had been one of the best he had ever tasted, while Mr Philp said Kurtis had “done himself proud”.

For his winning meal, Sam served a spicy parsnip soup, followed by pork tenderloin with an apple cider jus and a lemon tart for dessert.

He said taking part in the competition had been an “amazing experience”.

Sam will now compete in the  district final, which is being hosted by the College of West Anglia for the first time in two years on February 1.

There he will face competition, from other Rotary Club-organised teams from towns such as March, Thetford and Bury St Edmunds.