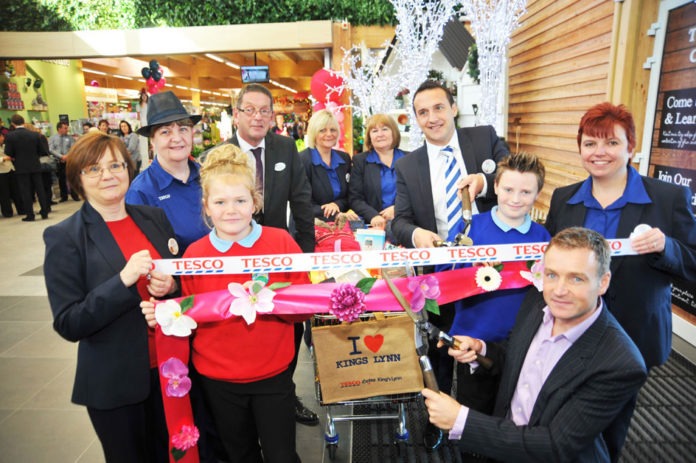 Crowds of shoppers turned out for the grand opening of the new Tesco Extra store and Dobbies garden centre in King’s Lynn yesterday.

Built on the former Campbells site in Hardwick Road, the development cost around £48m and has created hundreds of jobs for the town.

The stores, linked by a huge glass atrium, were launched by celebrity gardener Chris Beardshaw with the help of children from Dersingahm Primary School and Nursery.

The trio, all aged 10, designed their dream eco-garden with nine distinct areas including a pond, woodland walk and recycling area.

Their design was picked from dozens of entries and the garden will now be created at their school by the Dobbies team as part of the prize.

“It’s going to be brilliant,” Bethany said. “We spent a long time working on our design.”

Mr Beardshaw, an award-winning garden designer himself, said he was very impressed by the children’s ideas.

“It’s not just the financial help the school gets, but the ongoing support and expertise of the team,” he said.

“It’s so important to engage with children of primary school age so we can sow the seeds of  knowledge and enthusiasm for gardening in the future.”

Mr Beardshaw said autumn was an important time to get out into the garden and prepare for next year, fertilizing the soil, setting bulbs and planting seeds.

Also at the opening were James Lewis, chairman and founder of the Reach for a Star and trustees Shareen Hannan and Simon Wade.

The King’s Lynn-based charity received a £1,000 donation from Tesco on the day.

Shoppers can join in the celebrations with activities in store today and this weekend, including food tasting, a live jazz band, children’s entertainment and face painting.

Hallowe’en activities are also planned at Dobbies from 4.30pm to 6.30pm  on Thursday.