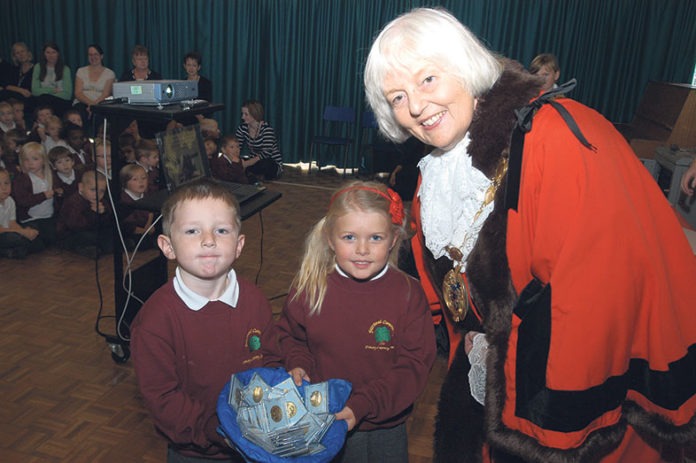 Children at Lynn’s Fairstead Community Primary  and Nursery School have received special coins to commemorate the christening of Prince George.

The coins were presented to all 331 pupils by West Norfolk Mayor Eizabeth Watson on Wednesday.

Children have been learning about  christenings and the royal family during lessons.

They were shown footage of the marriage of Prince William and Kate and the first public appearance of Prince George during a school assembly.

Head teacher Hazel Spinks said it was a nice occasion for the children.

“The whole day went very well,” she said, “The coins are actually in celebration of the Prince’s birth but we wanted to wait until his christening to give the children an opportunity to learn about their future king.

“We explained to them that if they keep the commemorative coins for a long time then they will be worth lots of money, so hopefully they will.

“We’re very grateful to the mayor for supporting our day and also to Martin Sale, chairman of the school governors.”

The christening of Prince George took place on Wednesday at St James’s Palace in London, three months after he was born on July 22.

The Prince, who is third in line to the throne, was baptised by the Archbishop of Canterbury in front of 22 guests which included senior royals, members of the Middleton family and the seven godparents.