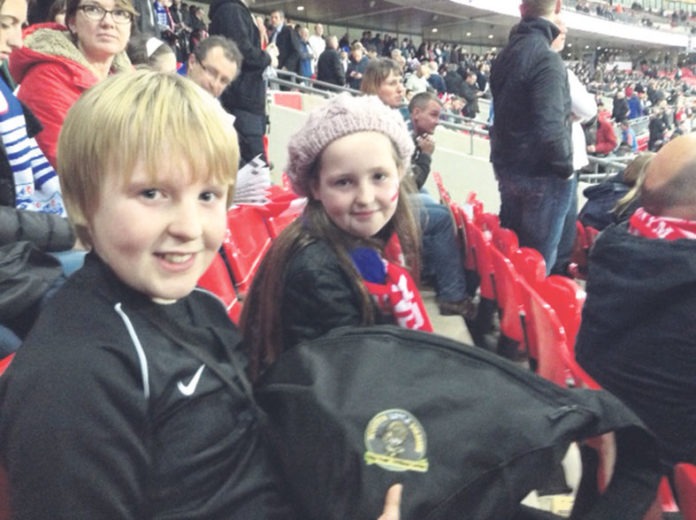 Stepping onto the Wembley pitch with the England football team ahead of an international match was a very excited West Norfolk boy.

Matthew Spencer, 11, was given the honour of being a flag-bearer for the game against Poland which England went on to win 2-0.

Matthew and his sister Ellen, 9, are both members of the charity following the death of their father in 2009.

Petty Officer Andrew Spencer had completed more than 21 years with the Royal Navy as a sub-mariner when he died in a road collision returning home.

“I can’t speak highly enough of Scotty’s – they have been brilliant,” said Mrs Spencer.

“They just phoned and asked if Matthew would like to be a flag bearer for the match. It was fantastic and a great opportunity for him.

“We also got tickets and watched the match from the stands and Matthew joined us. It was an amazing experience,” she said.

“Matthew got to watch the warm-up sessions and had a great time. We recorded the match on TV and watched it when we got home.”

Mrs Spencer moved to Norfolk with her family after her husband was killed and both children joined Scotty’s when they arrived in the county.

“The charity has done so much and we have bag-packed to help raise money for them. I just can’t praise them enough for what they do,” said Mrs Spencer.

All the members of Scotty’s receive cards and gifts for birthdays and Christmas as well as at other difficult times during the year.

The charity also arranges treats and surprises and offers the holiday homes to those families needing a break.

For more information about the charity see: www.scottyslittlesoldiers.co.uk