Home News Roll up, roll up, Mr Fips Circus is back in town 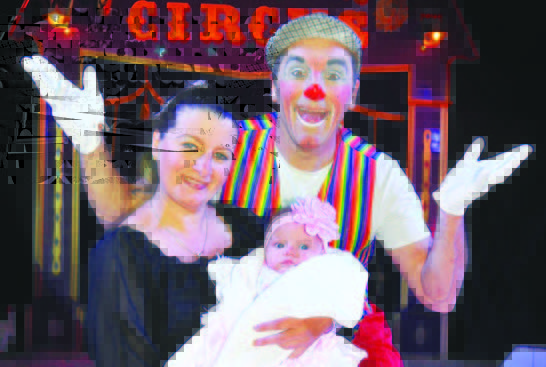 The troupe arrived in West Norfolk earlier this month and will be staying at Knights Hill until Sunday before moving to Denver to entertain audiences with mischief and aerial contortions from next Wednesday.

This is the second time Mr Fips circus has visited West Norfolk since it started life in 2011.

And owner Jan-Erik Brenner said the crowds had been fantastic so far.

“It’s been great returning to Lynn and seeing familiar faces, but it’s even better when we see new, younger members of the audience enjoying themselves.

“Our show is really for the children, they don’t forget their first time at the circus and we want to make family memories.”

Mr Brenner has been working in circuses since he was ten.  He is a third generation clown, with both his father and grandfather having worked as clowns before him.

Two years ago Mr Brenner and his wife, Carolyn Roberts, decided to open their own circus when they “fell out of love with performing the same routines”.

“We wanted to bring the romance back to the circus,” said Mr Brenner, “I’ve been working in circuses for more than 30 years and my wife has been performing since she was seven, so we knew we could do it.

“Now we’ve worked our way up to be an established company. We’ve just finished a seven-week stint in Skegness, which is almost unheard of.

“This job has allowed me to travel all over the world and perform for some amazing people including Madonna, the King of Thailand, the Pope and Prince Charles.

“This is a family business. My wife and I both perform and so does my Dad at the age of 74.”

And the newest member of the circus is the couple’s daughter, three-month-old Lola.

“She’s going to grow up in a fantastic playground with lots of aunties and uncles but the most important thing always will be her education,” Mr Brenner added.

“We would love her to follow the family business but obviously we’ll leave that decision entirely up to her.

“It was the same with my parents when I was growing up.”

Mr Brenner added: “We’ve had a great time with the people of Lynn so far but would love to see even more come down and see us.”